Continuing on for the theme of the week, let's set the time machine forward a few years to April of 1969 to see both the end of one era, and the dawn of another. 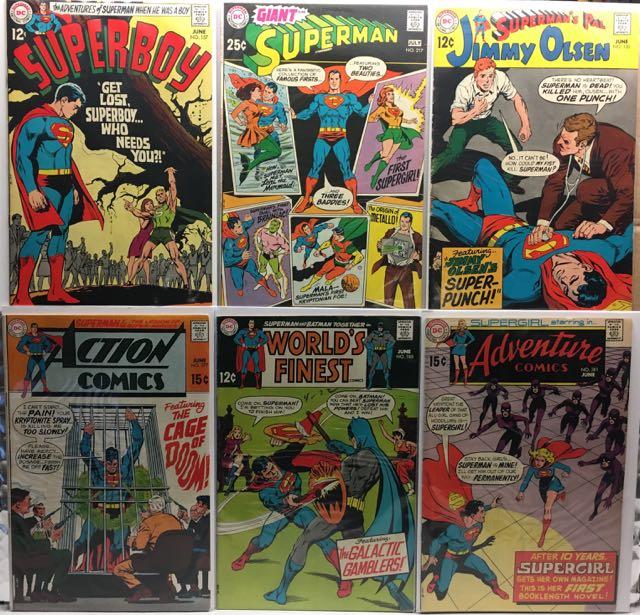 The end of the Silver Age is a hard one to pin down, and there's a ton of debate to be had.  I, myself, like to keep things simple and generally assume that the end of the 12¢ books also ends the Silver Age, and this is the month that it happened.

I sorted the books by release date, so you'll see that it starts with 10¢ books and ends with the 12¢ books.  Aside from Adventure Comics #381, which features the debut issue of the solo Supergirl stories, there is no real tonal shift per se.  It was more of a gradual shift as the civil rights movement started to shift the consciousness of the country forward.

We do get a great month of Neal Adams covers though!  Superboy #157 features another in the all time favorite "people vs. Superman" theme.  Superman and Batman duel it out gladiator-style in World's Finest Comics #185.  While not one of his most iconic covers, he gets the honor of doing Supergirl's first issue from her headlining run in Adventure Comics.  He's also credited with inking the Curt Swan cover for Superman's Pal Jimmy Olsen #120, but I'll be darned if I can see any of Curt left in the final project.

Superman #217 is a giant-size issue, featuring a great load of reprints with the first appearances of Brainiac, Metallo, Lori Lemaris, the pre-Kara Supergirl, and of course...Mala!

Four Neal Adams covers and a bunch of classic reprints?  I call that a win!