Is this KEY Bronze Age book going to surge in value...? Well the answer is YES, because due to recent sales, it has already begun!

I just finished editing my official write-up for my newly acquired Daredevil #111 CGC 9.8 WP in my Registry Set, and I decided to share it with the collecting community, as this acquisition is a significant one! Therefore, please enjoy the following commentary and the high resolution front cover scan! :-)

Daredevil #111 showcases the 1st appearance of Kenuichio Harada, who is better known as the supervillain...the Silver Samurai!

Moreover, high-grade examples of this classic Bronze Age KEY are extremely scarce, due to the fact that it predates the 1st appearance of Wolverine (Incredible Hulk #180) by 3 months and contains a large portion of black and gray inks, which make super high-grade examples very difficult to acquire! For example, according to the CGC Census Report as of 5/25/13, there are only a total of six (6) copies (including my copy) graded as a Universal 9.8 and only sixteen (16) copies graded as a Universal 9.6! With that said, as of May 7, 2013, my copy was officially graded by the CGC as the "6th" Universal 9.8 in existence! Further, of all the CGC 9.8 and 9.6 examples, very few of them contain perfect "white page" quality, as this copy displays!

As a native New Yorker, I can also appreciate the cover art, as it displays the spectacular NYC skyline in the background, with the Empire State building featured as the central iconic structure! Moreover, the attention to detail by Mr. Bob Brown & Jim Mooney is superb, as the accuracy of the NYC landscape is impeccable! They drew the Hudson River with sailboats and ships in motion with the water, and if you look closely, they even included a portion of the Jersey City skyline located directly to the East of the Hudson! Suffice it to say, the imagery depicts a realistic view of a typical NYC day, while the Silver Samurai slashes his sword against Daredevil, while suspended on a rope ladder hanging from a cargo plane in midair!

Truly, this is a Bronze Age KEY that I will cherish for a LONG TIME to come! The Silver Samurai's popularity is going to increase exponentially in the near future, as he will be featured as the main villain in The Wolverine, which is scheduled to premiere at the box office on July 26, 2013! Therefore, considering the following books have the same CGC grade and page quality, I can easily see a copy of Daredevil #111 competing in overall market value with an Iron Fist #14 (1st appearance of Sabretooth)! Although Sabretooth will always remain Wolverine's arch enemy, this book might eventually exceed Iron Fist #14 in overall value, due to it being more rare and harder to obtain in high grade, as it was published a little over "5" years before Iron Fist #14 was initially published!

In closing, I am sending a HUGE shout-out to my fellow CGC Registry and Board member Chin, AKA "Manifesto," for selling me the original book prior to submitting it to the CGC for grading! THANK YOU my brother!!

For those interested in the history of the Silver Samurai's character development, please enjoy the following information retrieved from http://marvel.com/universe/Silver_Samurai:

Keniuchio Harada is the mutant son of the former Japanese crime lord Shingen Harada. As a youth, Harada mastered the attendant disciplines of the medieval samurai and sought employment as a warrior for hire. He first worked for the criminal Mandrill and clashed with the blind hero Daredevil. Harada then served the Viper, an agent of the terrorist organization Hydra, as her bodyguard. In that capacity, Harada battled opponents such as the costumed crime fighter Spider-Man, the martial arts master Shang-Chi, and the team of mutant trainee heroes the New Mutants.

Following his father's death, Harada sought the leadership of Shingen's Clan Yashida from his half-sister Mariko Yashida, but was opposed by the ronin Yukio and Mariko's lover, the mutant adventurer Wolverine. Later, Harada worked with Wolverine to free American private investigator Jessica Drew from the influence of Black Blade of Muramasa, a sword mystically imbued with its creator's madness. Wolverine himself fell under the sword's spell, but managed to overcome his possession after which Harada took up the sword, finding himself worthy of its power.

After Mariko's death, Harada claimed leadership of Clan Yashida and was briefly employed by the Japanese government as leader of their fledgling super-team Big Hero 6. Ultimately, his inability to lead Clan Yashida allowed the Mongolian crime lord Haan Kaishek to take control, and he allied with Wolverine to defeat the Kaishek's. However, the disgrace of losing leadership was too great for Harada, and he returned to his mercenary ways.

Eventually falling into the service of Hydra once more, Harada was dispatched to battle the female ninja Elektra and was seemingly killed. Revealed to have survived, the Silver Samurai resumed his criminal career following an encounter with the mutant Blindspot. Allied with known terrorist Lady Deathstrike, Harada attempted to establish himself as the "Silver Shogun," leader of the Yakuza. He was also briefly a prisoner in The Raft as part of a super-villain stockpiling conspiracy, but he escaped and returned to Japan. Harada subsequently became a member of the Japanese Prime Minister's security cadre. During the course of his duties, Harada faced Wolverine, who cut off his hand in search of information on the Muramasa Blade! 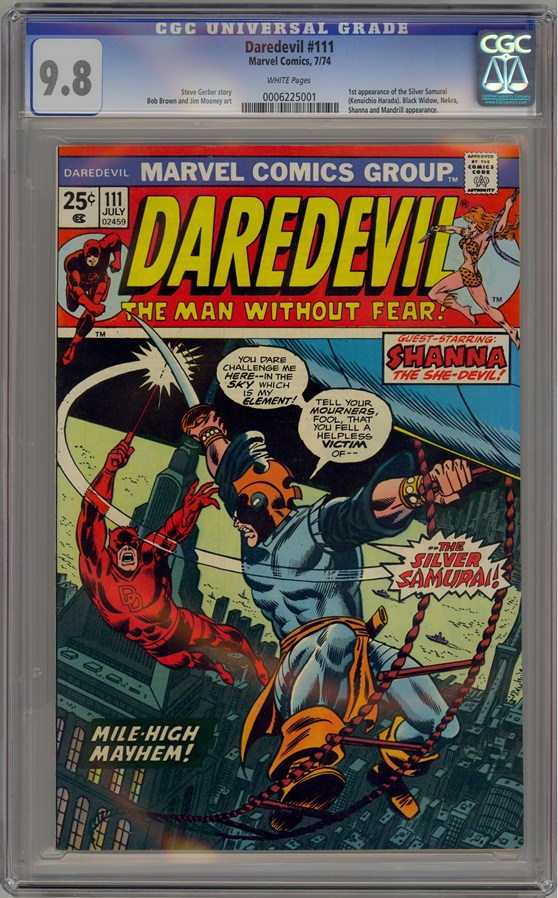