My Brother, My Enemy!

Although I have actually had this book in my possession for about a month already, I just finished writing my commentary on it - so please enjoy!

X-Men #97 showcases the 1st appearance of Lilandra (whose face is not shown) and the return of Havok and Polaris! In addition, Eric the Red makes his first appearance in the new X-Men title!

This is by far one my favorite covers in the entire new X-Men run! I LOVE battle covers in particular, and this classic showdown between Cyclops (Scott Summers) and Havok (Alex Summers) blasting each other with powerful energy beams - does not disappoint!

As depicted on the cover of X-Men #94, the iconic jet in which the new X-Men abandoned in mid-air after an explosion, is now shown burning violently in the background while a startled Colossus, Storm and Nightcrawler witness their leader fighting his brother in a death match!

As a direct result, the ground is cracked open from the impact of the jet's crash-landing, and the magnitude of Cyclops and Havok's energy collisions are emitting heat so intensely, that it appears to be creating a crater surrounding the area in which they are standing!

Who will win? Will it be older brother Cyclops putting his younger brother Havok in check? Or will it be younger brother Havok imposing his will and making an example of his superior? Furthermore, will one of these major X-Men characters die in this issue? These were the speculations of many avid X-Men fans back in February of 1976, simply from viewing this classic Rich Buckler and Dave Cockrum battle cover!

In terms of the physical condition of this book, it's important to note that high grade copies are very difficult to acquire in CGC 9.8, due to the partial black portions on the upper half of the cover that reveal the slightest of defects! Moreover, this example is perfectly wrapped and centered and has excellent color strike! Therefore, once I saw this copy, I fell in love with it and made sure that I was the one bringing it home after auction!

In closing, please enjoy the complete synopsis of this issue, which was retrieved from: http://marvel.wikia.com/X-Men_Vol_1_97

Professor X is plagued by nightmares of a galactic war, in which some alien being draws his attention to her lone ship attempting to escape the destruction. However, before Charles can see the alien's face, he awakens screaming. His screams awaken Moira MacTaggert who comes down to the kitchen to find Charles making tea. He explains his dreams to Moira and when she tells him to confide in his X-Men, he asks her how can he explain to his teammates that he's going mad. Meanwhile, in the Rio Diablo region, Alex Summers and Lorna Dane have made themselves an idealistic life. As Alex goes off on another geological survey, Lorna goes about her daily chores in bliss over their current lot in life. When she hears a knock at the door, she goes to answer it, expecting Alex. Lorna recognizes the person at the door but finds it impossible that they are here now. Before she can act, the unexpected visitor blasts her with an energy beam, knocking her out. Hearing the noise, Alex doubles back and finds Lorna is pulling out a new costume. When he asks her what's going on she calls herself Polaris and blasts Alex.

Three days later, Charles Xavier has decided to take a vacation and is leaving from JFK Airport. Scott Summers, Jean Grey, Storm, Nightcrawler (using an image inducer that makes him look like actor Errol Flynn) and Colossus see him off. They are surprised to see Alex and Lorna appear in costume. Jean picks up thoughts from their minds and warns the others that it is a trap; however the warning comes too late as Polaris attacks her. As Xavier's plane pulls off and flies away, the X-Men suit up and try to stop Havok and Polaris from destroying the Professor's plane. Colossus stops Havok from blasting the plane by knocking him over, causing his cosmic blast to strike an empty 747 instead.

Cyclops grabs his brother and demands to know why his brother is attempting to kill Professor Xavier. Cyclops gets a shock when Havok's leader appears wearing his old Erik the Red costume[1]. When the X-Men attempt to attack Erik, he blasts them away. Polaris turns her attentions to Storm and Jean Grey, and Storm has to save Jean from a nasty fall. Havok and Cyclops battle it out, but when Havok buries his brother under rubble, he goes to his aid. This plays into Scott's hand because he was only playing possum and knocks his brother out. Colossus and Nightcrawler attempt to take out Erik the Red, but find themselves no match for the powerful being who easily bats them aside. Storm meanwhile, loses her temper when Polaris refers to their battle as a game and strikes her down with a lightning bolt. Seeing Lorna get injured is all it takes to make Havok lose his cool and lash out at full power, vowing to kill all the X-Men for harming her.

Just then, Wolverine and Banshee arrive, prompting Erik the Red to order Havok and Polaris to retreat, and the three flee the scene. Cyclops has the perfect opportunity to blast them out of the sky but cannot bring himself to injure his former comrades. When Wolverine calls him a coward, Cyclops angrily punches Wolverine, and when Wolverine goes to strike at Cyclops, Storm orders him to back down. As the X-Men prepare to head back to base, they are unaware that they are being watched by two separate sets of eyes; one being the mutant hating Stephen Lang, and a second an unknown figure. 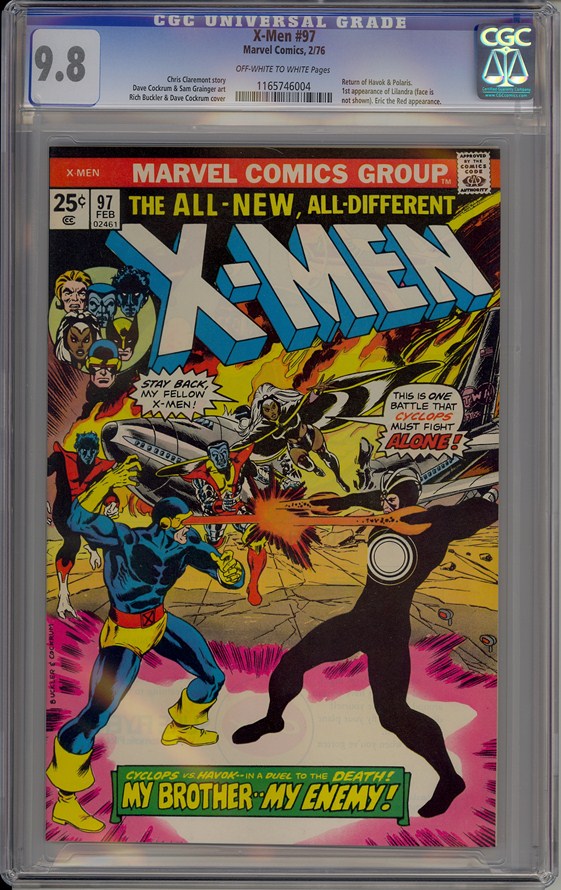