The first "true" appearance of Wolverine in top CGC grade is vaulted in the Professor's collection!

Although I actually acquired this one-of-a-kind specimen in July of 2012, I recently revamped my entire commentary in my CGC Competitive Set, and decided to document it along with all of my recent CGC journal acquisitions!

As usual, please enjoy the following commentary and the high-resolution front cover scan of this Bronze Age KEY! :-)

Incredible Hulk #180 showcases the very "1st" appearance of Wolverine, who is featured in a single panel cameo on the last page!

Aside from Incredible Hulk #181, in which Wolverine makes his 1st "full appearance," in my personal opinion, this book is the second most important KEY Issue of the Bronze Age! We are talking about the very first time "Wolverine" was brought into existence!

Moreover, not only is this copy the highest-graded example currently attainable, but it is arguably the finest copy in the world! By analyzing the front and back scans, it's hard to believe that it was not previously graded as a MINT CGC 9.9! Further, this pristine example originates from the Suscha News Pedigree Collection; out of Sheboygan, Wisconsin!

For a deeper insight, the following is an excerpt taken from the original owner's detailed explanation as to how he amassed his world-class collection, which can be read in its entirety at:

"Although comic books were only 15 to 25 cents each at the time, buying more than a hundred a month represented a big chunk of my tiny, $3-per-hour paycheck. The books were mainly purchased at newsstands and drug stores. It was about this time that I got the idea to go directly to the local magazine and comic distributor, Suscha News (founded in November 1937), and propose a deal.

I explained to them how many comic books I bought on a regular basis, and how I'd buy a lot more if the prices were lower. To my surprise, they agreed to sell me newly arrived comics at half price off the pallets in their back room. This gave me access to the books as soon as they arrived in Sheboygan, so l was more likely to get certain low-distribution titles. I also got to "cherry-pick" books, and my comics from then on were free of shelf wear from browsers. I would carefully go through distributor boxes filled with the same issue of a book. I'd get it down to around a dozen or so mint copies of a given book to try to find the MOST mint copies in the group. I was looking for books with the best centering, the shiniest staples, the flattest covers and the sharpest top and bottom of the spine.

Now that the cost of buying comic books was cut in half, I also was able to buy multiple copies of each. Sometimes, I'd get a half-dozen or more copies of Number One or milestone issues, such as Thing vs. Hulk matchups.

My arrangement with the distributor lasted until 1976, when I decided to give up the comic book buying and boxing grind, and "lock" the collection. I bought very few comics after that -- a few hundred at most."

From this background information, I want to personally thank the original owner for the impeccable job he has done in hand-selecting some of the finest KEY issues in the world!

Another interesting fact to add to this wonderful acquisition is that out of all the known CGC-recognized pedigree collections to date; the Suscha News Pedigree is the only one that contains a copy of Incredible Hulk #180 in CGC 9.8! Further, there are actually two (2) CGC 9.8 Suscha News Pedigree copies of Incredible Hulk #180. However, according to the CGC certification numbers on the CGC labels, this copy was graded first, which happens to be the better-looking of the two as it displays razor-sharp edges, perfect centering, and extremely bold and vivid ink-color saturation! With that said, I challenge you to locate a more perfect-looking specimen of this historic issue! :-)

In closing, I am sending a BIG SHOUT-OUT to Darren of "Pristine Comics" for selling me this rare gem! 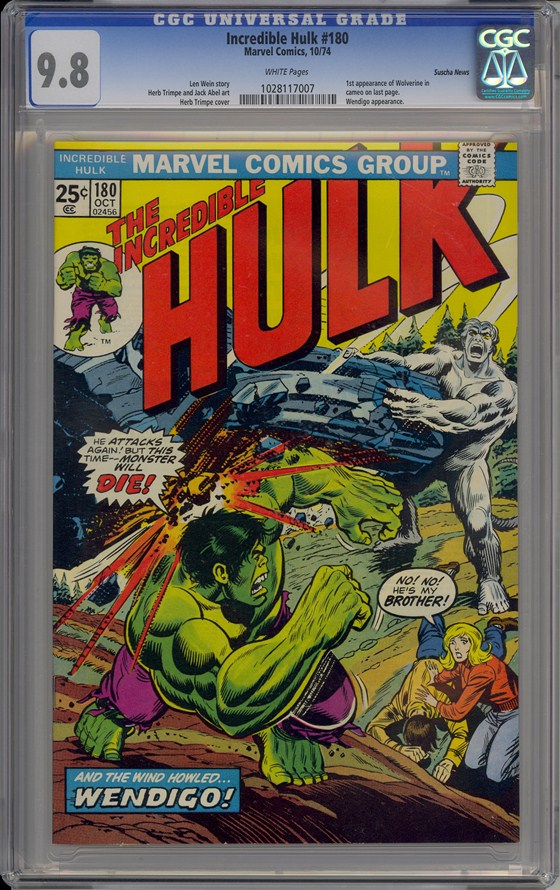