For those of you who read my previous journal entry entitled, "Mile High Providence," with this acquisition, you can now fully understand the significance of having discovered that my X-Men #94 CGC 9.8 is also a Mile High II Pedigree!

With that said, I am now a proud owner of the two most valuable Marvel Bronze Age Grails in CGC 9.8, in which both originate from the Mile High II Collection!

Furthermore, I encourage you all to visit my CGC Competitive Set, "Enter Wolverine," listed under the Incredible Hulk #180-#182 Wolverine Set Type, so that you can get the full experience of my presentation!

In the meantime, like I would normally say, please enjoy the following scan and commentary, as I proudly document my acquisition on the #1 Grail of the entire Bronze Age!

Incredible Hulk #181 showcases the "1st full" appearance of Wolverine, as well as his "2nd" overall appearance in the historical record!

Moreover, there are only a handful of comic books that have literally stood the test of time and have reigned over any other book of its era, and Incredible Hulk #181 is one of those exceptions!

If you were to think of a single book to represent the most sought-after, most valuable and most significant issue of an entire age, it would be Action Comics #1 of the Golden Age; Amazing Fantasy #15 of the Silver Age; and Incredible Hulk #181 of the Bronze Age! In other words, the first appearances of Superman, Spider-Man and Wolverine have superseded the importance of any other character of their respective time periods!

With that said, the world was introduced to the claw-slashing, berserker-raged mutant Wolverine, who made a long-lasting first impression during his debut in November of 1974, as he battled the most powerful character in the Marvel Universe--the Incredible Hulk! However, Wolverine wasn't anything like the major superheroes before him; instead, he was ill-mannered, hot-tempered and walked the earth with a tortured soul, as he would later struggle with his origins and the purpose of his creation. He was a government experiment--the perfect weapon--Weapon X! As a direct result, the "anti-hero" was born!

Wolverine would later become a major addition to the new X-Men team, who would eventually become the most popular character on the X-Men roster! From this success, Marvel featured Wolverine in his first solo comic; in a classic 4-part mini-series, which was published in September of 1982. Fast forward a little over six years ahead, and Marvel finally catapulted Wolverine into his own monthly series in November of 1988! Furthermore, in nearly 40 years of his existence, Wolverine has become the most popular character in the entire Marvel Universe, next to the franchise's marquee character--the Amazing Spider-Man!

For any hard-core Wolverine fan or collector, acquiring a high-grade example of Incredible Hulk #181 is a special event! When I first opened up the package and unveiled my beautiful CGC 9.8 WP copy...I was speechless! I finally became a proud owner of my favorite character's 1st full appearance in history!

Therefore, Certificates of Authenticity (COAs) were issued for every Mile High II comic, to document the book's origins to its original warehouse find and to identify it as being one of the finest copies in existence. On the back of the COA, which cannot be seen from the scan, the following is written:

"The second Mile High collection was located in a long-forgotten warehouse in New York by Mile High Comics in early 1985. In total it contained 1,700,000 comics from 1965 to 1979 that had never been sold to the public. While most of the comics were in excellent condition, only the finest were selected for the designation of quality expected from a "Mile High" comic. Please respect the unique quality of the comic you have purchased by keeping it out of light, heat, and high humidity. Also, maintain your certificate of authenticity with it at all times as no replacement certificates will be issued. For your protection, be sure that the corporate seal is embossed on this certificate. Only embossed certificates are genuine."

From this background information, I definitely agree with the COA statement in regards to the premium quality of a Mile High II comic. This copy is one of the most perfectly-wrapped and centered examples I have seen on the market! In addition, the colors are brilliant, the staple placement is impeccable and the corners are razor-sharp! This pristine gem truly rivals the lone CGC 9.9 out there!

In closing, I would like to thank Mr. Doug Schmell of Pedigree Comics for selling me this Bronze Age Grail! 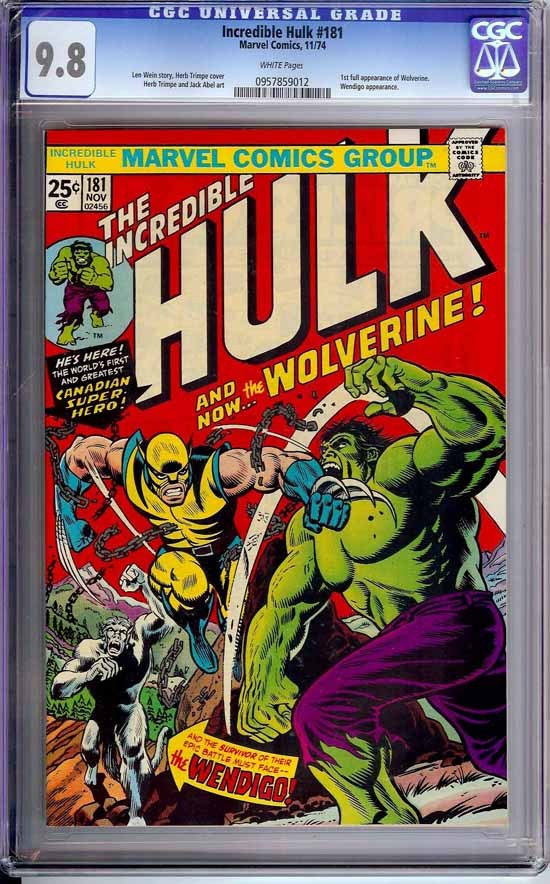