So...I'm looking through the books in the July 1st Heritage Sunday Comic auction and I see that there are three golden age Caps in there.  All raw and restored to various degrees.  The issue I'm most interested in is #65 which is an apparent VG- with slight color touch to cover and trimmed on all three sides.  Let me repeat that.  TRIMMED ON ALL THREE SIDES.  I think most collectors would agree that trimming is the worst kind of restoration a book can have since someone basically removed part of the book to make it look better.  That cannot be undone!  So I figured this book would go for "relatively cheap" since a 3.5 unrestored just sold for $685 in June of this year.  Maybe like $350-$400 I thought.  Nope.  The @%$# thing hammered at $600, which, after the buyers premium is $720!

I can only guess the winner doesn't care about trimmed books...which, I suppose some people...may not?

Or maybe the winner just had to have the one cover where Cap slaps his partner?

Either way, I wasn't paying that for that book even though it was the next book I needed on my way down from issue #78 (besides #72).  There are 38 unrestored copies on the census (give or take a few).  It's not like there are 9 or even 19.  It will come up again!

After not winning that book (since I didn't bid due to the price already being above what I was comfortable with) it allows me to pursue others.  The hunt is most of the fun to me anyway.  With a limited budget, you have to choose your books carefully and cannot afford (literally) to overspend.

Keeping on track with the current series you are on can also be a challenge as well when you come across a beautiful book you want but buying it would slow down your main series collecting.  One such book last week was All Top Comics #16.  A 5.0 off-white to white pager was on eBay.  I was tempted to go after it as I love the cover.  It last sold on 6/6/16 for $825.  It was at $911 with under a minute left until it shot up to $1,336 in the last ten seconds!  A 61.7% increase in just over two years?!  Damn someone wanted that book! 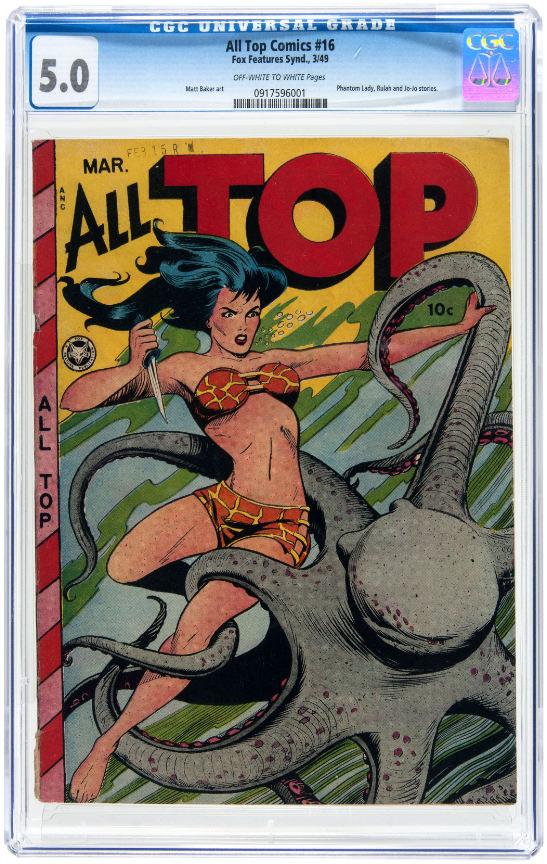 I did win a GA Cap book from the most recent ComicConnect auction which is on its way to me now.  I'll post it as soon as it arrives!