How many years from now will we look back at the arrival of Angela in the Marvel Universe and reminisce about her strange odyssey from Angel/Spawn Killer to Thor's Sister/Asgardian Assassin?

In May of 2013, Angela officially returned to the four-color pages with pomp and circumstance in Age of Ultron #10, after she had been declared dead in Spawn #100, 13 years prior. Angela's resurrection meant that the long standing copyright dispute between comic book paragons Neil Gaiman and Todd McFarlane had miraculously come to an end. We can only speculate the reasons behind Gaiman's decision to let Marvel have her; I often wonder how Angela would have fit into the DC Universe if Gaiman went that route, and the countless battles she may have had: Angela vs. Superman; Angela vs. Wonder Woman; Angela vs. Shazam; Angela vs. Etrigan; Angela vs. Lobo; Angela vs. Justice League Dark; Well... you get the picture... but the House of the Mouse got her, and she's there to stay... and probably better off in the long run.

I remember when I was miffed at how Marvel initially portrayed Angela in the pages of Guardians of the Galaxy Volume 3, #'s 5, 6, and 7. It was like Angela had been hit in the head by a space rock and robbed of not only her memory, but her charm and personality. Quite frankly, it was painful to read especially with the way Gamora had pushed her around and shoved a laser gun in her face. WTF?!? What happened to that sassy, kicka$$, take no sh*t and take no prisoners attitude? After her exhumation, did Angela get spayed? And speaking of exhumation... How did Angela return from the dead after Malebolgia impaled her through the chest with her own trident? Here's the short answer to that: Don't ask so many questions and just accept things the way they are. Who needs continuity anyway? In comics it is so overrated. Am I right?

But that's all ancient history and water under the bridge now that Angie's been retconned as the legitimate heir to the Asgardian throne. And speaking of ancient history... below is a snapshot of my collection of Angela's initial appearances in Guardians of the Galaxy Volume 3, #'s 5, 6, 7, and 10.

I would have gotten issues 8 and 9 signed and graded but Francisco Francavelli was a no-show on the one day I attended New York Comic Con. Oh well... perhaps next year.

Most of the dupes are going on sale as quad sets on eBay... but if anyone wants a set... just PM me.

Thanks for reading and as always... Happy Collecting! 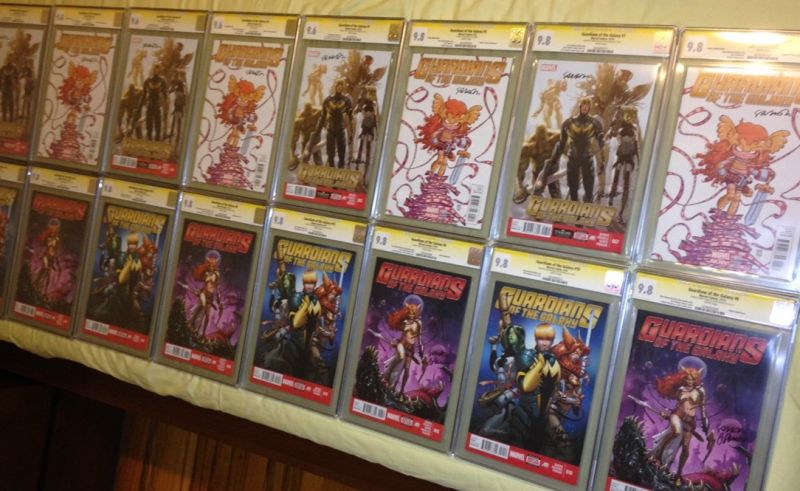