Is there any comic book in which the cameo 1st appearance of a character is worth much more than the character's 1st full appearance?

It's been a while since I wrote a journal post, but this is one of the topics that I have wanted to write about for some time now.

I primarily collect Marvel Comics with a focus on Bronze and Copper Keys, so for any DC fans or collectors reading this journal, I welcome your feedback and your DC perspective on the topic. :-)

To begin the discussion, I would like to start by mentioning probably the most famous brief cameo appearance in Marvel Comic's history, which is none other than the 1st appearance of Wolverine, featured in the Incredible Hulk #180, published in October of 1974.

I remember when I purchased arguably the finest copy of Incredible Hulk #180 CGC 9.8 WP, which was one of the two Suscha News Pedigrees, for $4,500 from Darren Adams of Pristine Comics back in March of 2013. A year prior to making my purchase, Darren sold a Suscha News Pedigree of Incredible Hulk #181 CGC 9.8 WP; Wolverine's 1st full appearance...for $15,000! That is more than 3 times the amount of Wolverine's 1st true (but very brief) single-panel cameo appearance!

Why is this so? If Incredible Hulk #180 documents the very 1st time Wolverine was brought into existence, then why does this issue continue to be undervalued? I came up with three very important factors to consider:

1) There isn't much of the character being offered in a cameo 1st appearance; sometimes the character is just there and not involved in much of the action. A good example is the 1st appearance of Gambit (in a cameo) in X-Men Annual #14, published in 1990. Gambit is featured in several panels, but is really not doing much in comparison to his 1st full appearance in Uncanny X-Men #266, in which he plays an intricate role in aiding Storm.

So let's look at some Bronze and Copper cameo 1st appearances VS their 1st full appearance counterparts. I typically purchase and collect CGC 9.8 books, so I will be comparing current fair market values (as of July 23, 2015) at the CGC 9.8 Universal Grade.

In terms of Amazing Spider-Man #300, Todd McFarlane's cover art is a certified "classic," as this issue also illustrates the last time Spider-Man would wear the black costume. In addition, the black costume is symbolic to Venom (which is also identifiable to his physical appearance), and I believe most collectors just find the cover really cool to collect (even if they're not a Venom or Amazing Spider-Man fan). These are some of the reasons why I believe this Copper Key continues to soar in value, along with the hordes of Amazing Spider-Man collectors seeking out the best copies for their prized collections.

On the other hand, the 1st full appearance of Mystique in Ms. Marvel #18 does not feature Mystique on the front cover; but rather Marvel Girl enlarged in the center with some of the Avengers in the background and subtitled at the bottom, "Even Avengers Can Die!" Mystique is a HUGE X-Men character; a super-villainess who has appeared in ALL of the major blockbuster X-Men films and has even led the brotherhood of evil mutants. Therefore, Ms. Marvel #18 is by far undervalued in our current market.

However, I truly believe that if Mystique was drawn on the front cover and had a headline like, "Now Behold the Mysterious Mystique," I bet the prices would be at least double than what they are currently selling for! This is also the same scenario with the 1st appearance of Rogue in Avengers Annual #10; CGC 9.8 copies are only going for $200-$400 at best, and if it wasn't noted on the CGC label, you would have no idea that this issue featured her 1st appearance. What does this reveal? That a character featured on the front cover in their 1st appearance helps increase overall collector demand and value.

Now take a moment to analyze the following comparisons:

What do you notice? Or did I make a mistake in current CGC 9.8 market values and need to reverse the numbers? Nope! That's right! These books represent a few examples in which the cameo appearance is consistently selling more than its 1st full appearance counterpart!

What's different with these issues? Well as one of my 3 initial points, you will notice that Bishop and Alpha Flight are featured on the front cover in their 1st cameo appearance, unlike any of the other cameo 1st appearance issues mentioned above! I am pretty confident that the X-Men film, "Days of Future Past," has helped to increase the value of Uncanny X-Men #282, as it was the first time an actor portrayed Bishop on the big screen. However, if you look at the front cover of Uncanny X-Men #282, you will see Bishop standing directly in the center with plasma balls emitting from his hands, with a catchy title reading..."His Name Is Bishop!" Of course you want to grab you a copy of his 1st true appearance because he's featured on the front cover and represented very well! 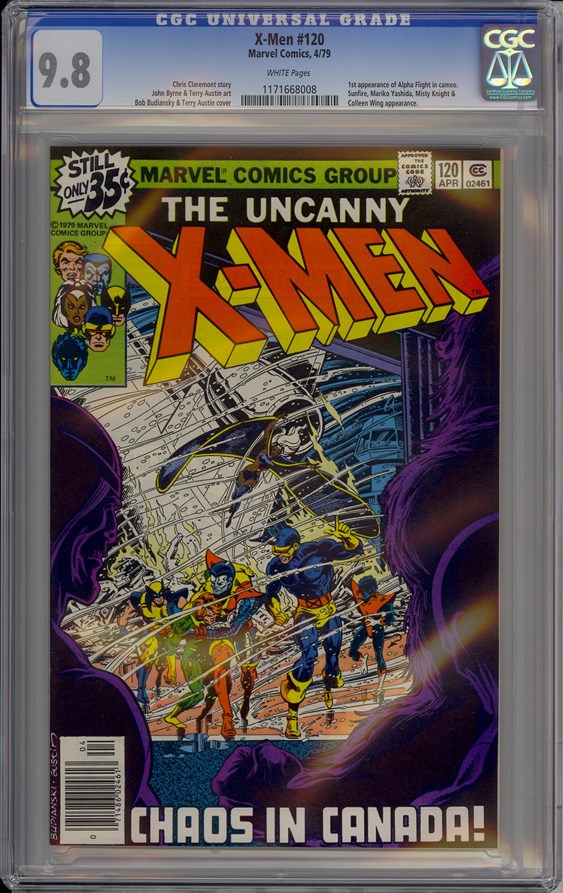