In anticipation of the release of Daredevil Season 2 on Netflix on March 18, 2016, I have decided to share my recent acquisitions and commentary specific to the new characters who will be featured in what I consider in my opinion, "the best comic book movie adaptation ever created!"

The scans and write-ups are taken directly from my CGC Registry Sets; this one hails from my newly assembled "Arachnophobia" ASM Complete with Variants Set!

Next week, you can look forward to reading about Daredevil #168; the origin and 1st appearance of Elektra!

I hope you enjoy the scan and the read! Have a great weekend and try to enjoy the "small moments" leading up to the hunt!

-Professor PecoraAmazing Spider-Man #129 showcases the 1st appearance of the Punisher (Frank Castle) and the Jackal!The Punisher was created by writer Gerry Conway and artists John Romita, Sr. and Ross Andru, with publisher Stan Lee providing the name.The classic cover art displaying the "Different and Deadly" Punisher was drawn by legendary artists Gil Kane and John Romita. The most "lethal hired assassin" is featured in his iconic skull-imprinted black suit with an arsenal of weaponry, including an automatic assault rifle in which he is unloading a full clip of ammunition directly at Spider-Man. The close up view of the Punisher's sniper scope depicts a defenseless and aerial bound Spider-Man avoiding bullets exploding against the surrounding brick buildings, with cross hairs aimed precisely at his heart! Couple this action on a commanding bright yellow cover, and you have one of the most sought-after and treasured comics in the history of the Amazing Spider-Man title!As a matter of fact, ASM #129 is considered one of the top 10 most valuable Bronze Age (1970-1984) comic books of all-time and remains a contender for one of the top 5 most valuable Bronze Age Marvel Keys! For instance, sales for ASM #129 in CGC 9.6 and 9.8 have already begun surpassing that of what Giant-Size X-Men has been selling for in grade. In terms of the Amazing Spider-Man title, ASM #129 is THE most valuable and expensive issue of the entire Bronze Age!Moreover, what made the Punisher truly unique is that although he was originally created as a villain; he was gradually developed into a crime-fighting antihero. It was characters like the Punisher and Ghost Rider (1st introduced in Marvel Spotlight #5 in August of 1972), that would influence the industry in creating more violent and grittier material.Since the Punisher's inception in February of 1974, he has starred in 3 feature films. The first Punisher movie premiered in the USA on July 8, 1990 at the Los Angeles Comic Book and Science Fiction Convention, and was characterized by actor Dolph Lundgren.It wasn't until 14 years later; on April 16, 2004, in which The Punisher had a reboot and was played by actor Thomas Jane with John Travolta playing the antagonistic character Howard Saint. The setting took place in Florida, which was not true to the comics as Frank Castle's origins take place in Queens, New York.The most recent installment, Punisher: War Zone, released on December 5, 2008, was played by actor Ray Stevenson. In addition, actor Dominic West played the Punisher's arch enemy Jigsaw (William "Billy" Russo), which is true to the comics as Jigsaw was introduced in Amazing Spider-Man #162 and plays a significant and enduring role throughout the Punisher's storyline.Unfortunately, none of the aforementioned Punisher films were successful. There were a number of reasons why none of the films gave the Punisher's character justice; they ranged from inconsistencies in the comics to corny representations of the characters to not finding the "right" actor to emulate and embody the Punisher to perfection.Fortunately, after decades of failed attempts to portray the character and build a successful franchise, in March of 2016, the Punisher will be played by "The Walking Dead" alum Jon Bernthal (Shane Walsh) in the upcoming season 2 of the critically acclaimed Netflix Daredevil series! Furthermore, this also means that the Punisher will officially be integrated into the Marvel Cinematic Universe. On that note, Marvel Head of Television Jeph Loeb said in the announcement on Marvel.com, "Jon Bernthal brings an unmatched intensity to every role he takes on, with a potent blend of power, motivation and vulnerability that will connect with audiences. Castle's appearance will bring dramatic changes to the world of Matt Murdock and nothing will be the same."Finally, it looks like the Punisher is going to get justice on the silver screen! In turn, this will also translate into increased demand for high-grade copies of Amazing Spider-Man #129, which means the market value is going to surge significantly! Actually...it has already begun!In closing, I won this pristine beauty at auction on Pedigree Comics in September of 2015! The bidding became ferocious during the final minutes, but I was blessed to end up with the winning bid!This particular copy sports perfect cover wrap, perfect centering, and perfect white page quality along with being perfectly cut! The color saturation is deep and bright and the corners are razor sharp! The only visible blemish is a small ink smudge located on the right-hand side of "The Punisher" text box; however, this is a common printing defect for this issue as some of the black ink would smear during the printing process. Nevertheless, this rare specimen is without a doubt one of the top 5 copies in the world and is currently the prized centerpiece of Arachnophobia!A big shout-out goes to Doug Schmell of Pedigree Comics for helping me to acquire this gem!Thanks for reading and Happy Collecting! :-)-Professor Pecora 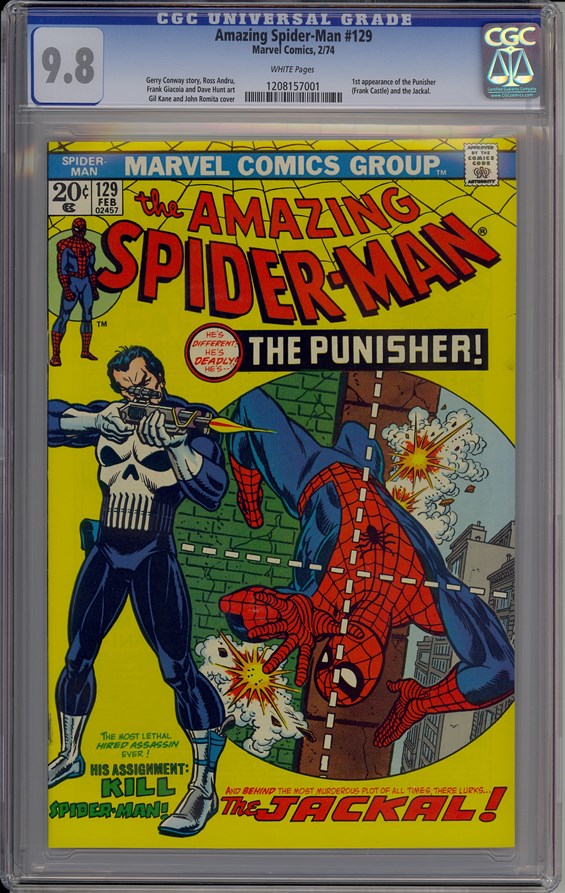