Here is a summary of the Marvel Price Font Variations that I have discovered hiding between the dates of June 1960 and February 1961. If you'd like to know more about them, please click the picture below and you'll be magically transported to the discussion thread in which we talk about them: 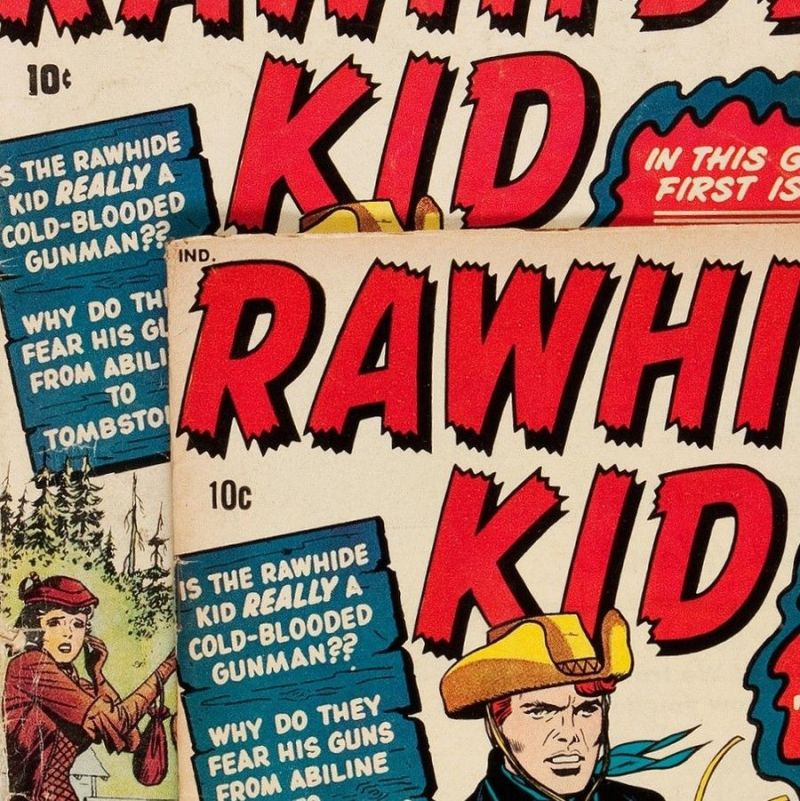 During the long years spent trawling eBay and other online sites looking for pence copies I developed a skill for spotting things that 'didn't look right'. I found a lot of printing errors that way and other such oddities. So when I got around to looking for the pence copies of the early Marvels I would know that a book - for example - with a white 10c on a coloured background would be the cents copy (duh) but a copy with a white box within which a price sat would be the pence copy. Here's what I mean:

The cents copy of Strange Tales #75 has a white 10c price set within the blue cover background: 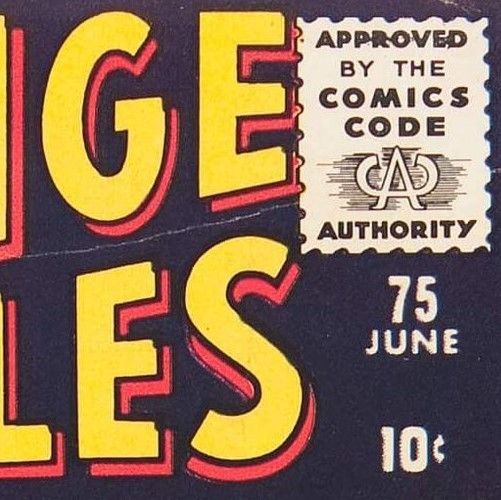 The pence copy has a white box with the 9d pence price set inside it: 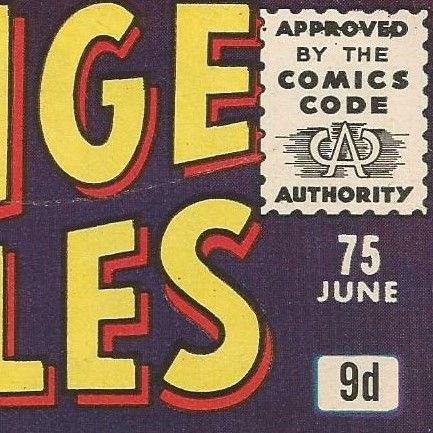 So you can see how you'd be able to spot the pence copy on books like these quite easily as you whizzed down the listings without having to open every one (which you may need to if your eyes are like mine). One day about ten years ago I saw the white box scenario on a book where I knew the cents copy had a white 10c set in the background colour. I opened the listing expecting to see a pence copy. I found a cents copy.

And that is how I personally 'discovered' Marvel US Price Font Variations!

A bit of subsequent research showed that others had noticed them too of course but, as is often the case, no one seemed to have researched them fully to establish exactly what existed and why.

I have spent the last 3 years researching them in detail having placed my ten year old finds in a folder marked 'look into these one day'. My research - which I now believe to be complete - has found 14 examples existing across the 91 eligible issues / 20 eligible titles in production from June 1960 to February 1961 inclusive. The 14 are:

Here they are in cover date, then title alphabetical order, with pictures: 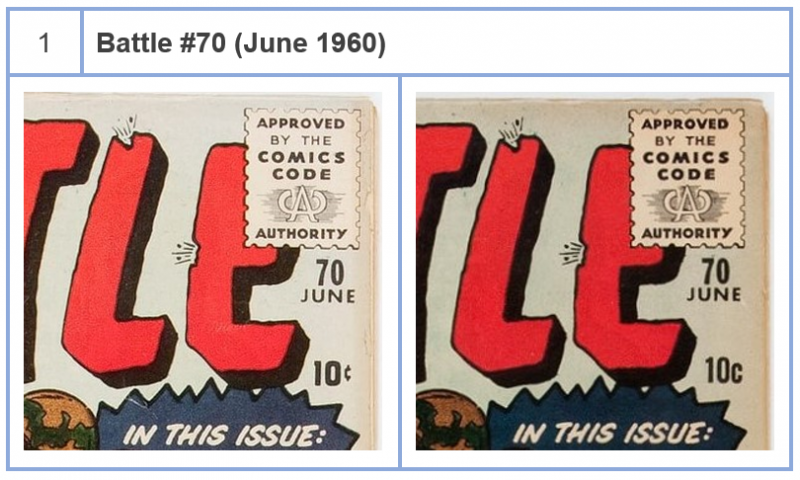 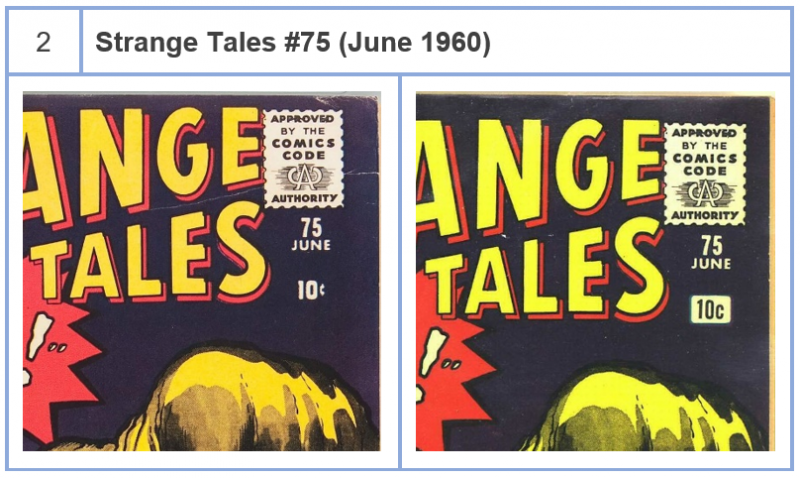 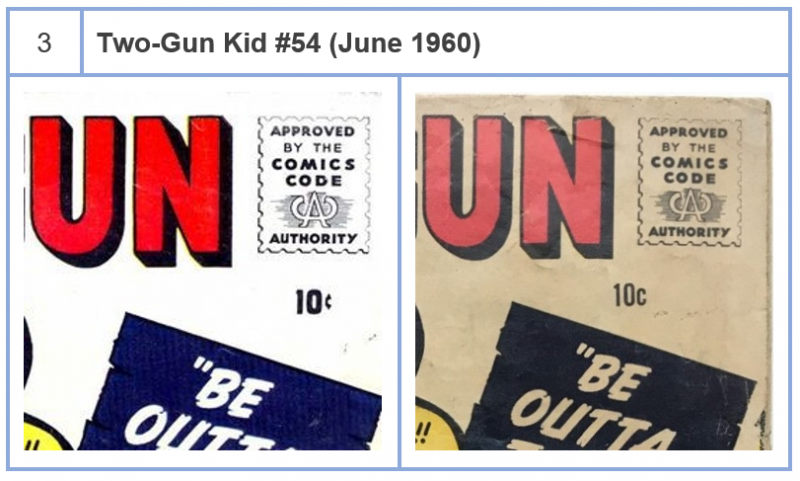 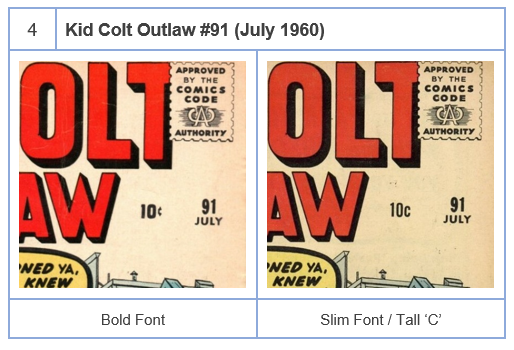 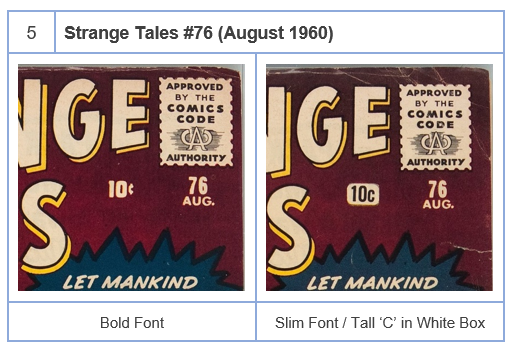 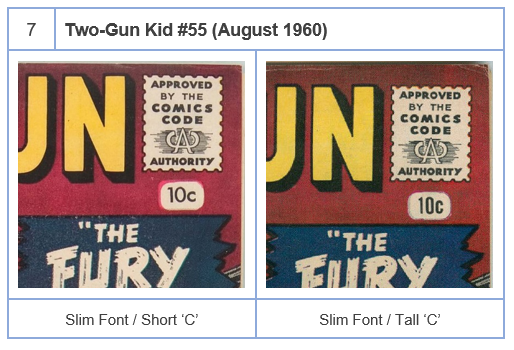 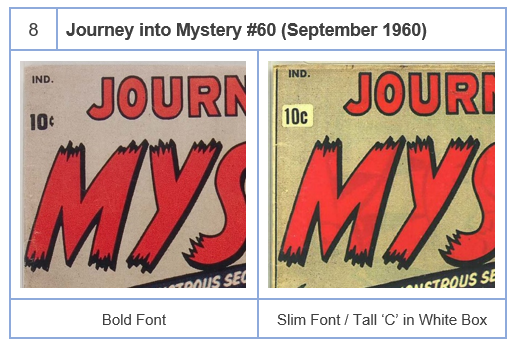 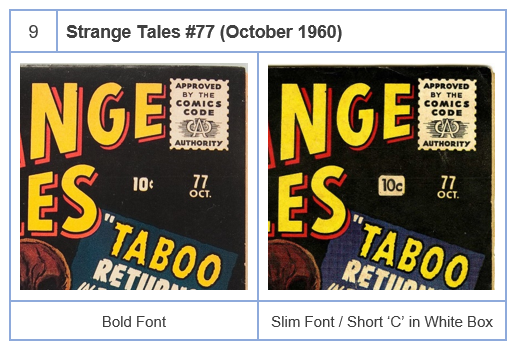 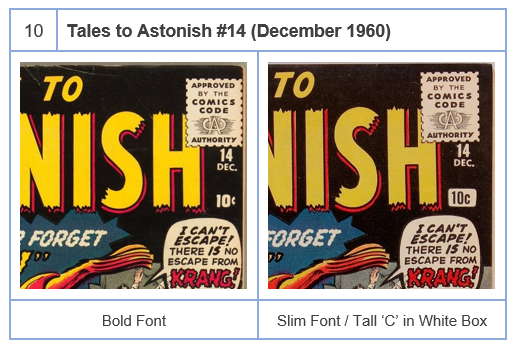 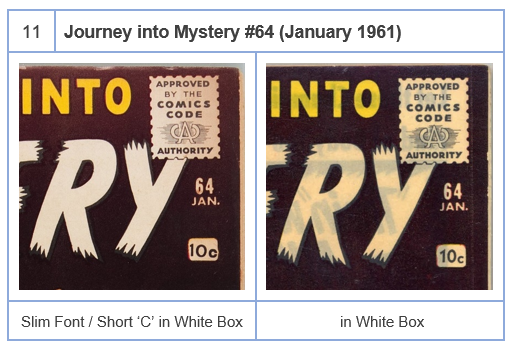 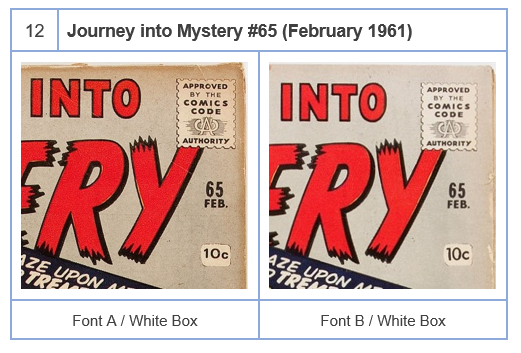 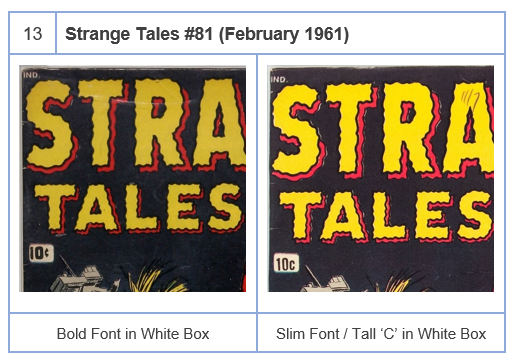 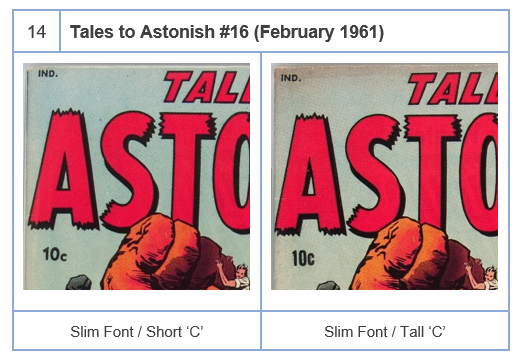 As ever, I have a spreadsheet which plots all the 20 titles Marvel were producing during the font variation window. It shows the types of fonts available for all 91 books - here's an extract to illustrate:

To date, no one has provided a verifiable reason as to why the variations exist. My own belief is that they exist because the pence variants exist. You can read my theories in the discussion thread (link above). I've invited CGC to take up the challenge and, recently, Matt Nelson advised me that they would try to find out what they can but would stop short of noting the variations on their labels until more is known:

"Also, we're all still trying to unravel the mystery of those varied 10 cent books from 1960-1961, so for the case of US Marvel editions that display two different price fonts (10 cents), we will not differentiate between them for now."

So, 14 variations in this time frame to find. Happy hunting, if you decide to build a set!

By Stephen Cranch based on v1.6 of the 'Marvel US Price Font Variations Summary'

P.S. I've excluded the three January 1962 dated 'Black Circle' variants (Journey into Mystery #76, Love Romances #97 and Gunsmoke Western #68) from the above summary for now as they sit well outside the date window and seem to be of a different type - more of a 'corrected error' than a variation scenario: 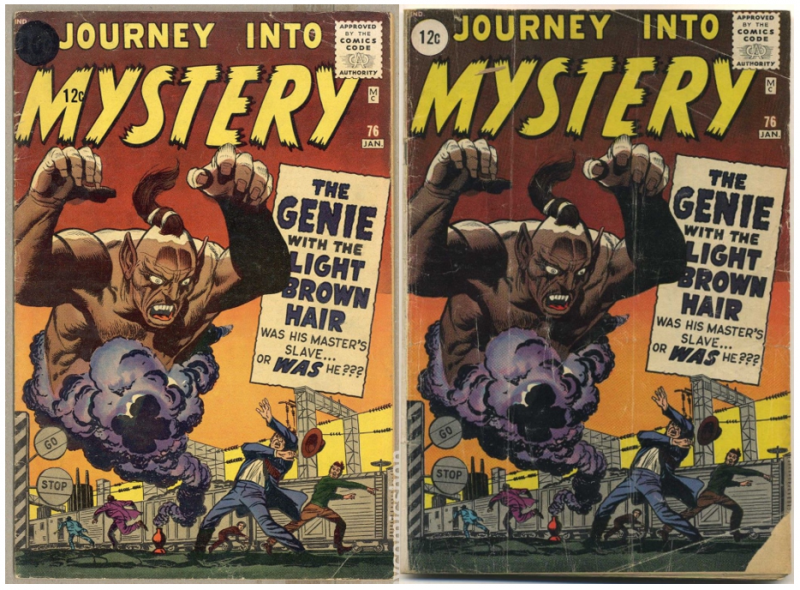 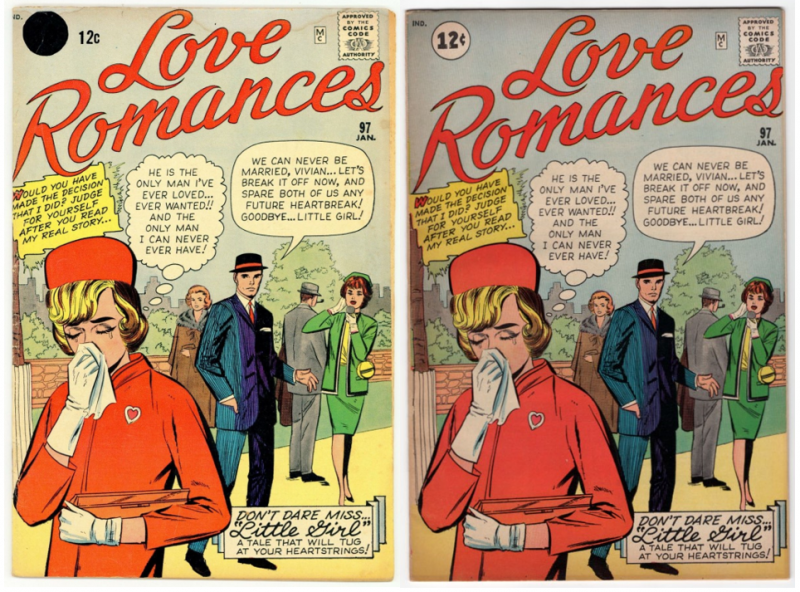 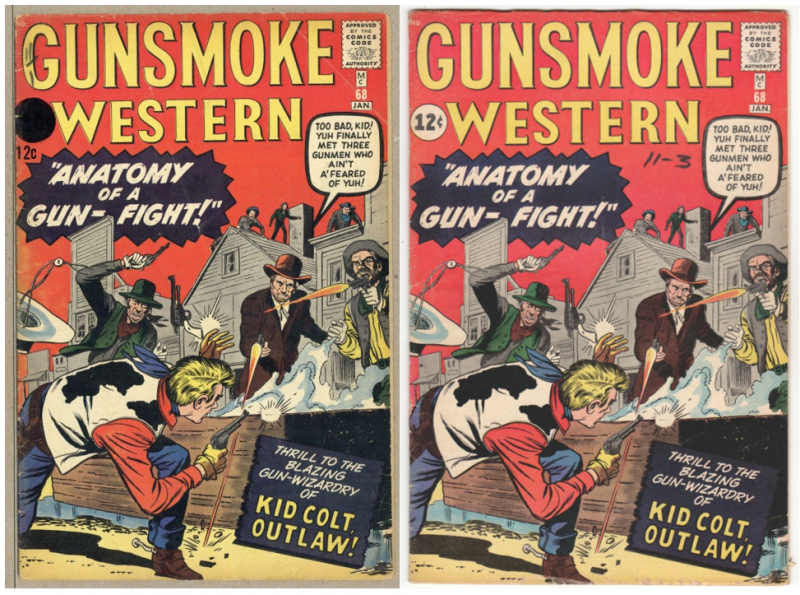 Frisco Larson and rakehell reacted to this
1 1