So, I've been enjoying my quest for Bronze.  But I've pretty much backed off the pursuit of all titles but Smith Art Conans.  I might attempt some early Savage Swords.  I've also snagged a few minty early appearances of Iron Fist...I'm thinking about going  after the keys of that series since the hype-train has slowed down on that character.   Essentially, all of the material I'm pursuing is "anti-cinematic universe speculation" and I'm snagging them in higher grade.  And why not!  They're so beautiful!

But just recently, after being disappointed on my strict want list at a small regional show, I stumbled across a few good deals on a couple golden age books.  And I found myself intrigued.  It's occurred to me that (with the exception of a few titles), there is a whole bunch of golden age stuff out there that is completely immune to cinematic hype!  So being a contrarian who likes rare stuff, I'm genuinely intrigued.  I had a brief daliance with golden age material about 20 years ago, so this stuff isn't entirely new to me.  I still have my Gerber Guides, but I didn't get very far.  The thing is, Golden Age material is practically like a new country to me.  So I've stuck my toe in the water with a couple of ECs, one of those odd 50's book where it's transitioning from a super hero title to a horror title (I find those interesting) and I accidently made a spectacle of myself  in the buyers area when I pulled the trigger on a Speed Carter Spaceman #1 and gushed about how I always wanted that book.   It's such cool stuff!

So now, I'm going to continue pursuing my high grade Conans (in the NM/NM- range), but I'm going to explore the cheaper side of the Golden Age.  I'm going to try to be patient with the GA stuff...letting the deals find me since I have an entire universe of books to consider.  Right now, I'm captivated by the stories in the EC titles, but i also love 50's sci-fi covers and I can't understand how  low grade golden Sci Fi books can be so cheap compared to pedestrian high grade silver and bronze!  I'd also like to snag some cool war covers from less popular characters and maybe grab one nice book to represent each of the more popular characters who managed to endure through the dark times of the late golden age and into the silver age.

One thing I do know is there is a lot to learn and make sense out of.  The market for some Golden Age books doesn't always make sense to me.  Why is one book so expensive when it's not necessarily rarer than another comparably rare book with a comparably rare character?  It's like the GA collectors have favorite books that they all agree are desirable, but there are others that seem just as cool to me that are cheaper.  I'll figure it out eventually.

Anyway, I'm steering clear of the cinematic hype and just trying to find good value for my money. 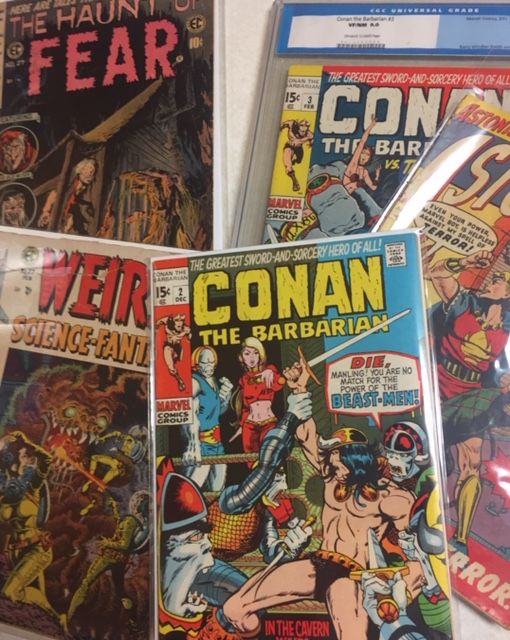