Hey, comic book friends! First, thanks so much for all your support with this project, it really means a lot to me.

I wanted to let you know that the Kickstarter for The Crimebusters #2 is about to end. There are less than 36 hours left until it ends at midnight ET tomorrow night. I'm not one to do any kind of hard sell, but I did want to remind people who might have been waiting to decide, especially because the number of Kickstarter pledges I get determines how many copies of each variant cover I end up printing. For instance, I have now sold out of all three variant covers for issue #1 - the Boy Comics #120 variant, the Trixie's Mysteries Book One variant, and the Kickstarter Exclusive variant. All gone! So if you do happen to want one of the variants for issue #2, it's a good idea to let me know now through a pledge so I make sure to order enough — and so you are sure to receive one.

Here's the link again - I can't embed it because the forums automatically turn it into a video instead of a link, which defeats the purpose.

For those who missed out on the first issue variants, I have come up with a solution — I've begun working on 2nd Print Variants. This way, people who have the 1st print variant covers still get their exclusive collectibility - there are only 25 copies of the Boy Comics #120 1st print variant in existence — and people who missed it can still get a copy. I know how collectors work — some people won't want to get the Boy Comics #121 variant if they can't also get a #120. I get it, I'm a collector! So the 1st print variant (which was an homahge to Captain America Comics #3) will never be reprinted, but people new to the series can get the 2nd Print Variant instead in order to still get that sweet, sweet Boy Comics logo on their book.

These 2nd print variants really are more Reprint Variants, because these covers I will reprint again in a 3rd or 4th edition if that ever becomes necessary. But the 1st print version, that's it, once they are gone, they're gone.

For the 2nd print variants, I am doing more homages to classic covers - the Trixie's Mysteries 2nd Print Varant is an homage to Matt Baker's cover from Amazing Ghost Stories #16, while the Boy Comics #120 2nd Print Variant is an homage to Charles Biro's classic cover from Boy Comics #10. I've only begun the initial linework on these, so they are very much works in progress, but both will be done soon and will be available as add-ons through the Kickstarter campaign: 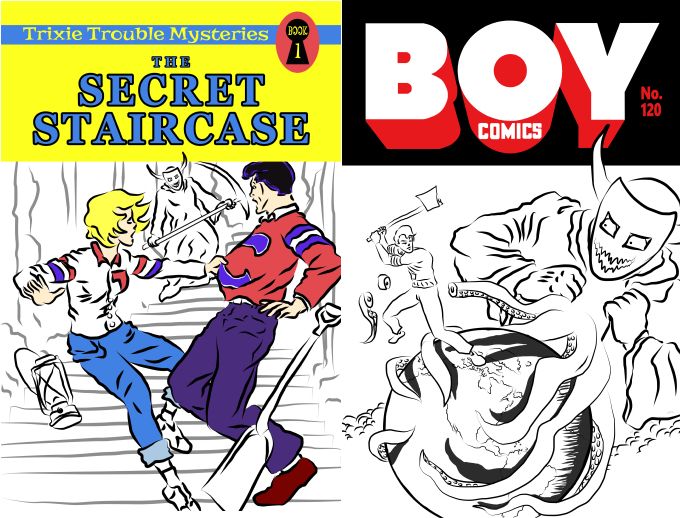 I can't wait to be done with this so I can start issue #3! Issue #3 is going to feature cameos and guest appearances from several Golden Age characters now in the public domain, and I'm really excited to show you some of that stuff! But first, I gotta finish this.