I grew up in a small town in South Western Ontario, my friends and I used to do all sorts of activities from tunnel ratting through drainage pipes to good old fashioned street hockey, but what we really liked to do was collect.

We started collecting sports cards  around the summer of 1987 and comics a few years later.

If I recollect correctly, the first comic book I had was Batman Annual 14 with TwoFace on the cover.

Sadly, over the years My friends and I drifted apart, though I continued collecting.

Mostly my collection was focused on raws, that as a kid I thought would be quite valuable.

Around the age of 14 things in my life began getting quite chaotic. I found myself getting into fights at school and eventually put into group homes until I was 18. Subsequently, my collecting took a hiatus.

Once I was 18 I was removed from the group home and thrust into the streets to fend for myself. Without much of an education or direction in life, I turned to substance abuse, which in turn I got in quite a few fights.

Eventually, I found myself at an alcohol rehabilitation clinic called "Brentwood". This is in the city of Windsor, where during my free time from programs I was able to resume my collecting activities.

I began to accumulate a rather large collection of books that interested in, but didn't really hold alot of value, Spawn run, Maximum Carnage run, Knightfall run and stuff like that.

Eventually I returned to Alcoholism and as the years rolled by, collecting drifted off into a distant memory.

It wasn't until the late winter of 2018 that I resumed my hobby.

I live in Toronto Ontario now, and the first shop I ventured into was "The Beguiling" on College St. This particular stores primary interest is providing the comic community with affordable raws at reasonable prices.

I hadn't even heard much about slabbed comics until a couple months later when I joined the forums and attended my first comic show in February.

I'm a big fan of the dexterity of Supervillains, especially Carnage who I find is a conflicted soul, much like myself (lol).

The first slabbed comic I bought was an Amazing Spider-Man 361 in 9.4 grade. I have no doubt in terms of fair market value that I overpaid considerably, but I was happy.

Over the past year and a half I have accumulated a pretty decent collection and being a member of these boards I have had an opportunity to meet and interact with some pretty awesome people.

I know we are all going through some tough times right now with the Covid19 Pandemic, but I can see that it has strengthened this community in ways I don't think any of us could have imagined.

As I continue to collect, I've amassed a list of books I have really wanted and have eventually acquired, including New Mutants 98 and Amazing Spider-Man 300 (my two personal favorites). I have also fluctuated between collecting first appearances of key supervillains in both the DC and Marvel Universe such as Darkseid and of course Carnage.

In the past year and a half, my interests have shifted from modern to bronze and even silver age books.

I have mostly directed my attention and finances to slabbed comic books, as I am not a professional grader and have really failed in alot of my submissions.

In regards to slabs, I like to garner my finances into accumulating 9.8s, which I have amassed quite a few since I really began taking comic collecting seriously.

My greatest purchase in my opinion, and despite my friend's protests has been Amazing Spider-Man 300 9.8.

Now I know people will say "Why did you buy such an expensive book that is common as dirt?"

Well, that is the mystery of that book, isn't it? How can one of the most graded books in the registry maintain such longevity and value? Too me I find it fascinating and in terms of strength of character (not monetary) it is one of the most valuable books available, and I imagine would be far more expensive if only 2000 copies were graded, and not 20,000.

Thanks for listening....and happy hunting! 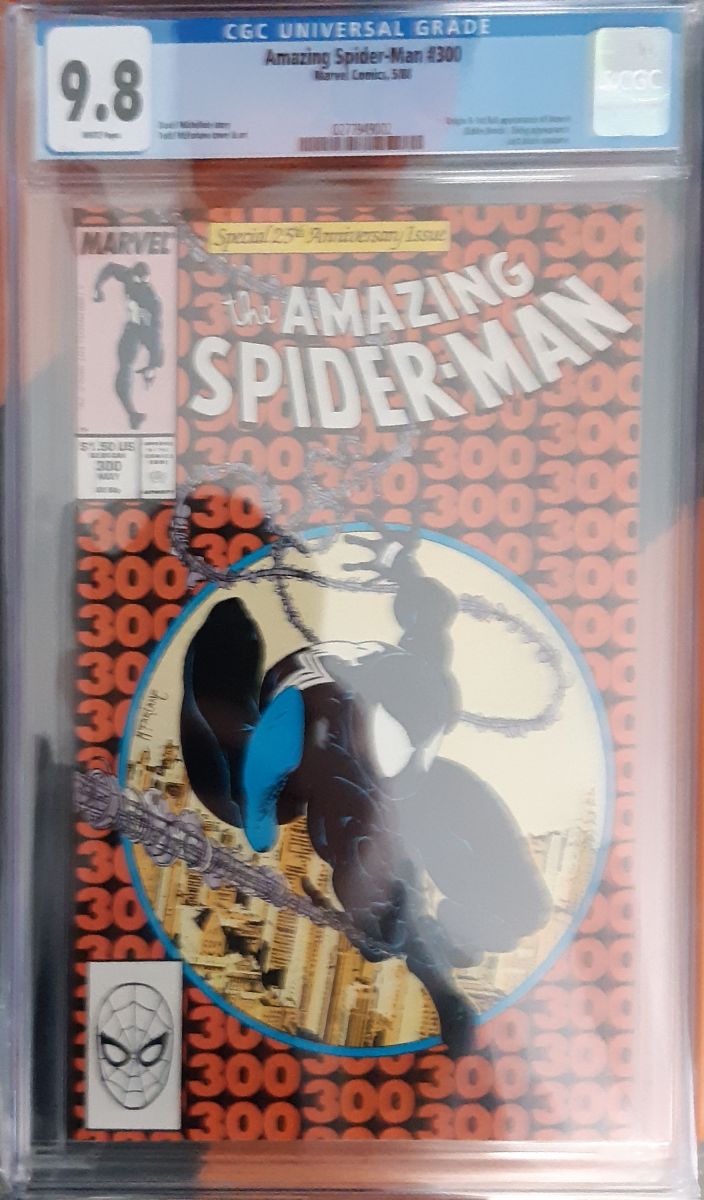