I moved in late 2012 to where I am now. This buy I believe happened 2013. Ever since Dark Knight had come out, I had slowly been getting into Batman more. I am to this day a Marvel guy, but I found that 70s Batman through til the 80s was tolerable, with some great runs, stories, and artwork/covers. Golden Age Batman was (and still is) outta reach I feel, although I do like a lot of the artwork a lot, and 50's/60's Batman just has no appeal to me. I respect those who do like it though, it's just not my idea of enjoyment.

Anyway, I had started by diving into well known good Batman reads. The Cult, Arkham Asylum, The Killing Joke. I added these and others and eventually, a couple Neal Adams issues. I was hunting online often for Batman lots, trying to find some older issue for a good price. Well one day, I lucked out. The listing was simply "older Batman comics" or something to that effect and the main image was grainy and poor. I clicked anyway and am thankful I did. There were a couple pictures, all poorly taken but the last one I could see Batman 251 poking out from the others on top of it. I got excited. This was a pricey book and here I had a chance to snag it. I did, and also got about 15 other older Batman books for around $60. But did I get a winner. Well the package arrived and I started pulling out the books. The guy did not even have them bagged and boarded and I could see why. They were beat. Tattered, worn, ripped. My heart sank. I had gambled and lost. But then the bottom couple books were not too bad and finally, the one I had waited for. 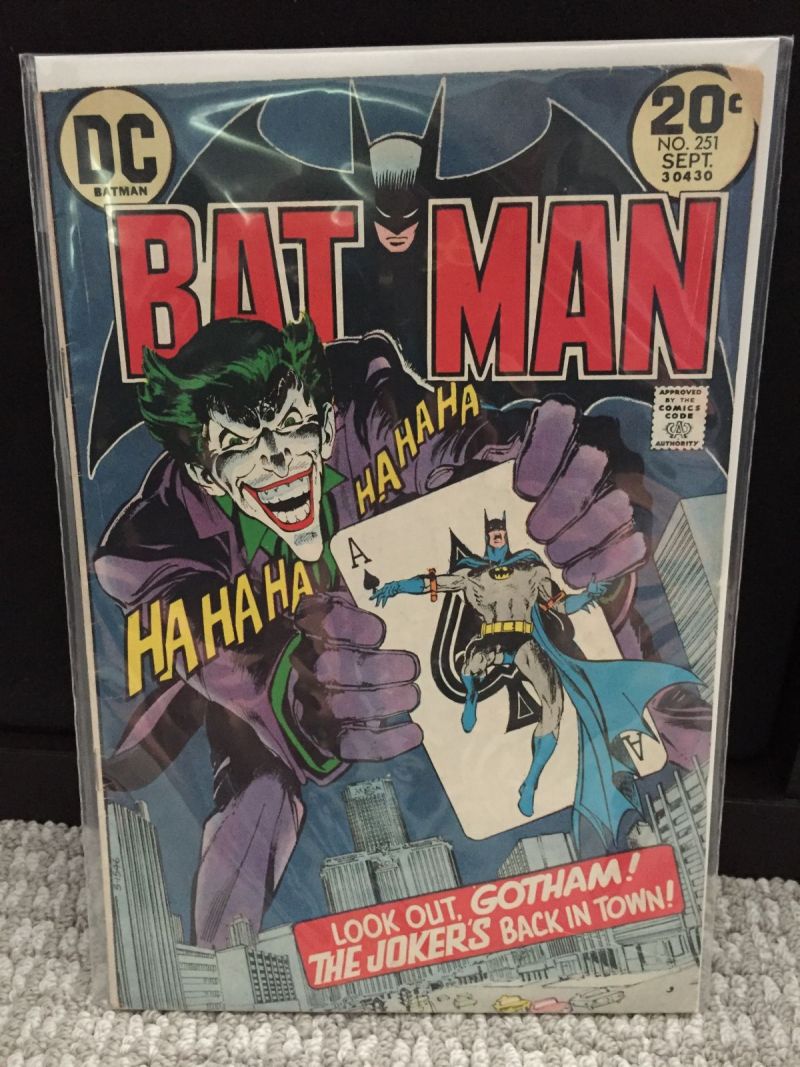 I lucked out big. And was extremely happy. This also served as a cautionary lesson, that sneakily buying a book or trying to and hoping it will be great based off grainy pictures can backfire. Trust me, I have made several purchases where I thought "hey if I get this book in this lot and it is in this condition, I will do okay!" only to get it in garbage shape and end up running even or even losing a few bucks. 90% of the time, I make these purchases in lots on ebay because something in the lot has some value that I can sell and break even and then there are leftover books that I keep because I want them. This worked out so that by the end of it all, I spent around $30 or so on this copy. Very pleased. But I have since learned to ask for better pics before diving in. I have come across many auctions and online listings where the pics look great and the price seems like a good bargain where I can get some of the books and sell others for a small profit, only to get more images and find that the condition is much worse than imagined. That being said, I still think you can find diamonds in the rough occasionally on ebay....seems harder within the last couple years but if you are patient, you will find good deals always it seems. This just happened to be a lucky one for me!