Shortly after moving to where I live now, a colleague who I work with was going through a tough time and needed to sell his collection. My wife knew him better at the time and knew I bought and sold comics and figured I could at least help see what he had. So I went over to see and man, did he have a lot. All of it had been largely untouched since the lat 80's. The best bunch of it all were the Uncanny X-Men books, including a Giant Size #1. Again, this was 7 years ago or so now and this book was not where it was now but still held respectable value. Most of the books sadly were in VG to Fine condition at best....great fillers. The GSX #1 was more of a 3.0-3.5, with the spine split, dog eared corners and creases. I was in "save up for house and wedding ring" mode so me spending was not an option. However, I offered to help sell online and ended up doing pretty well, getting around $1500 for him at the time (he kept the sales data recorded and made sure I was paid for shipping and any fees...if memory serves me, the GSX sold for around $275, and many other books were $30-50 each. He was a teams guy, big on Defenders and FF and X-Men and Avengers. There were lots of runs which sold well for him. In the end, he was happy and allowed me to keep some books as payment for my troubles (I told him I preferred to do this as he had some books and stuff that were cool and that I would love to own). Here is a snapshot of what was kept. There were more minor fillers too, as I think I came away with like 60 books or so but these are the most memorable that I own. 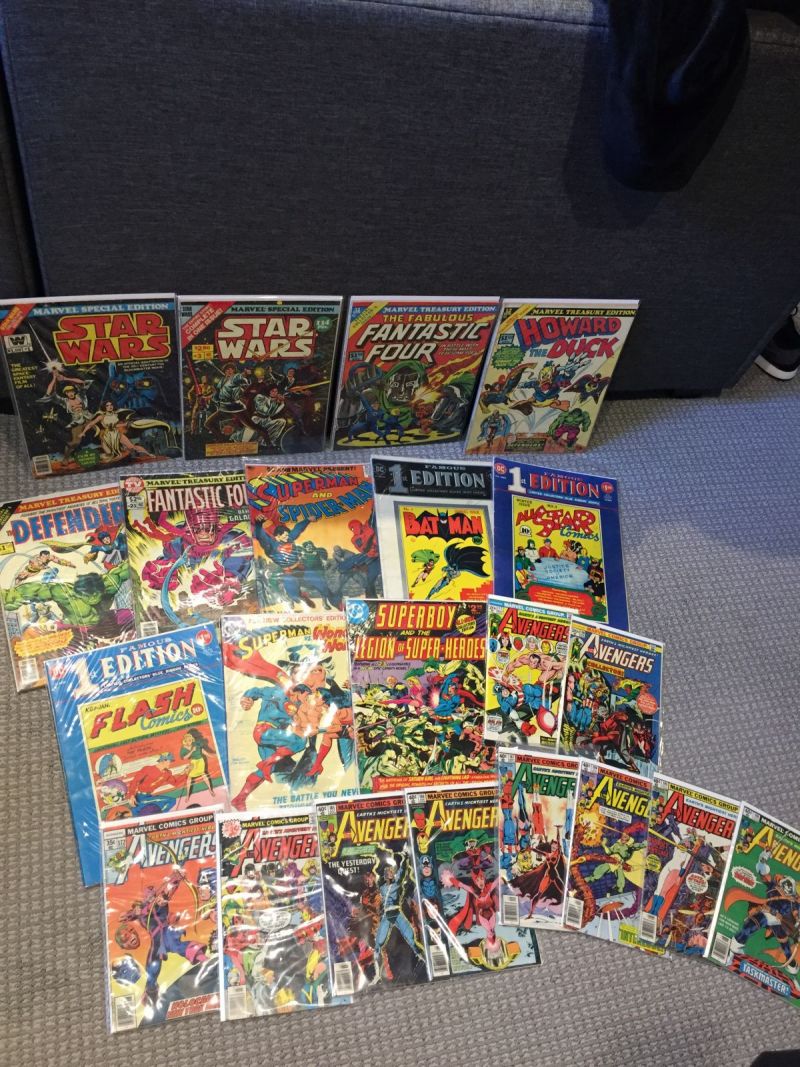 Thus began a joy for Treasury sized comics. At the time, Taskmaster was not getting any real love but I knew it was a first appearance and was happy to have it. His Avengers stuff was the only stuff he had (outside of the X-Men stuff) that I was interested in owning, along with the treasuries. He had a run of Avengers from 140 or so up to 170 then it was sporadic. I took the couple earliest ones he had seen here, plus a few others I liked, along with the treasuries. I told him what I figured they were all worth and he said take em. They are still part of the collection today.

I need to chat with him more because I know he still has some stuff left over. There was a run of Marvel Two In One that just did not sell at the time. Like 50 issues but nothing super early in the run and all VG so it was a tough sell. I would love to see if he has anything else tucked away because he collects music and CDs and DVDs like a machine....its a massive collection. Maybe he has some comics he forgot, ya never know. Either way, he was happy to get the cash during a tough time, I was happy to get comics. Win win.