So this collection was a doozy. A connection was made with someone I knew who's stepfather had a bunch of comics. I had met the guy couple of time and one day, he mentions having comics and says he was thinking of just "having a fire" with them. I said woahhhhh at least let me see what they are. I THINK he was joking but either way, he started sending boxes with his stepson who I knew and I valued them. He said they were just taking up space and would be happy to get whatever money he could so once again, I was in a selling situation. The deal was similar to my last one, where I offered to sell it all for him in exchange for some books. A few of the books I wanted were worth a fair bit so I ended up paying him a bit of money but I made out quite well. It was a collection that had a bit of everything...a full Ms Marvel run with duplicates, a bunch of Conan mags, other Marvel mags like first Star-Lord, Planet of the Apes magazines, bronze age war books, a John Carter run, a Warlord run, some Green Lantern/Green Arrow, a Howard the Duck run and a first bronze age Black Adam, some Claremont/Byrne X-Men, a higher grade X-Men 58 and higher grade silver age Archie books. Once again, I made around $1000-1200. In addition, these were the books I snagged and paid a VERY discounted amount for. 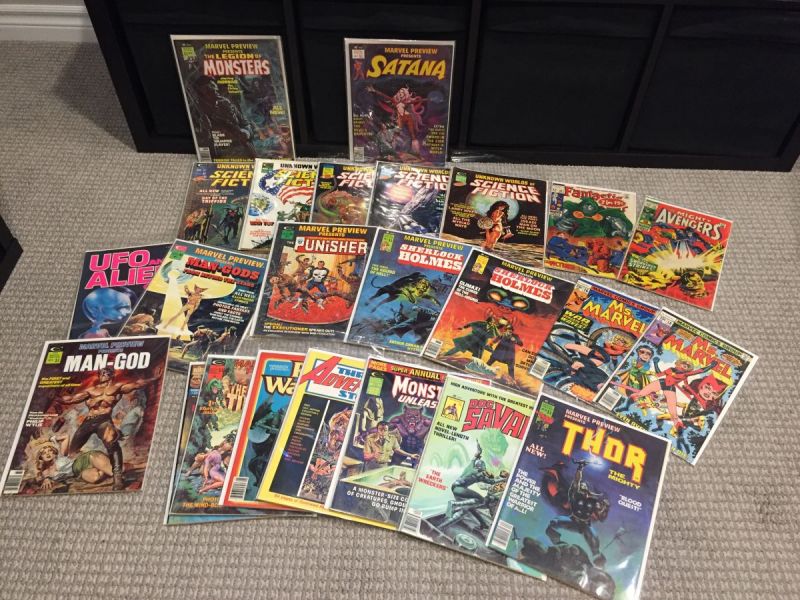 I was amazed at the condition on these too as they were stored in boxes stacked with none boarded and only some having bags. I went with the magazines because they rock and I did not have many. Now, I have a healthy amount. Some of these books like the Ms Marvel Mystique appearances helped me finish the run, which I was elated about. I also filled in some Spider-Woman issues I was missing but I forget which ones exactly so they aren't pictured, as well as some random others that did not sell and he said just to keep them. The FF book had a wicked cool stamp on it so I had to keep it