Those of you who have been foolish enough to follow my pence threads over the years will know that I have often speculated as to why the UK distribution price stamps used by Thorpe & Porter in the early 1960's were numbered 1-9 like so: 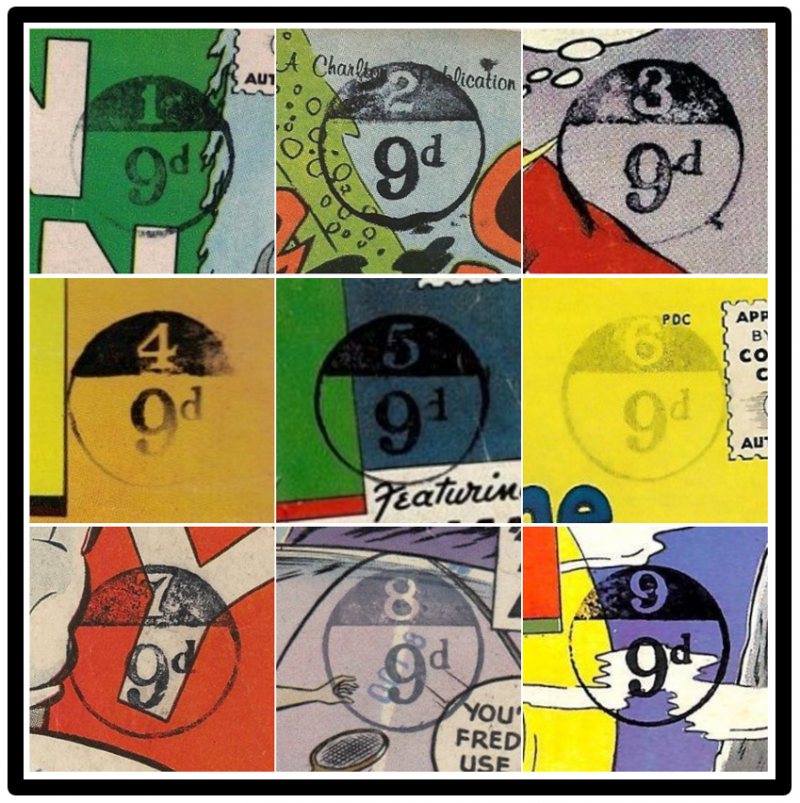 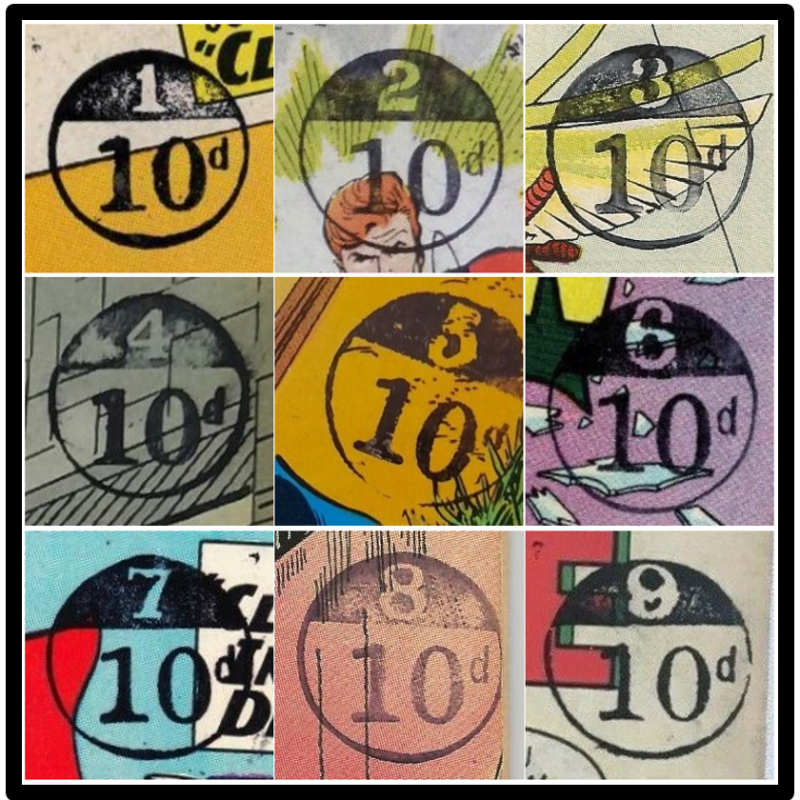 I've lost track of how many experts and collectors I have asked about it down the years and everyone was stumped. I undertook an exercise myself a year or so ago, captured I think in my DC UKPV thread, to see if I could detect any patterns (as I often do). It was unsuccessful because I was looking for the wrong thing, in the wrong way. Recently,  two contributors to a thread I started about the early distribution of US comics to the UK finally cracked the code - @01TheDude first suggested it and then @Albert Tatlock, helped in no small measure I would assume by his extensive DC collection, confirmed what he and likely a few other collectors of the day had worked out. You can read all about it here, in my UK Distribution Review thread:

Anyway, in short, it turns out that the numbers correlate with sequential - probably monthly - shipment arrival dates from the US to the UK. We know that the import ban on comics was lifted around mid-1959, so it is no surprise to see that our stamped US books started to arrive in the UK at the end of 1959 / beginning of 1960.

Using the many images that I had already captured in relation to my distribution review, examples from the thread contributors, and a subsequent trawl of eBay and other online sources, I plotted all the DC comics I could find in line with the 1-9 stamp numbers and the pattern was indeed confirmed: 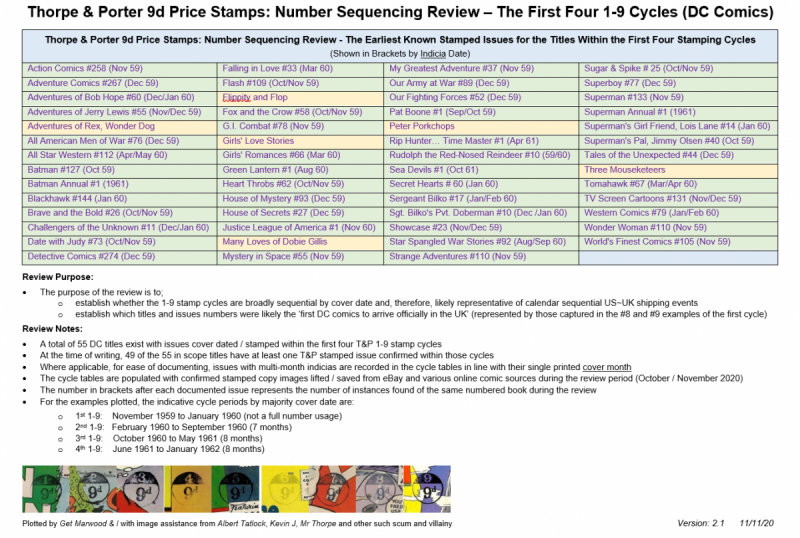 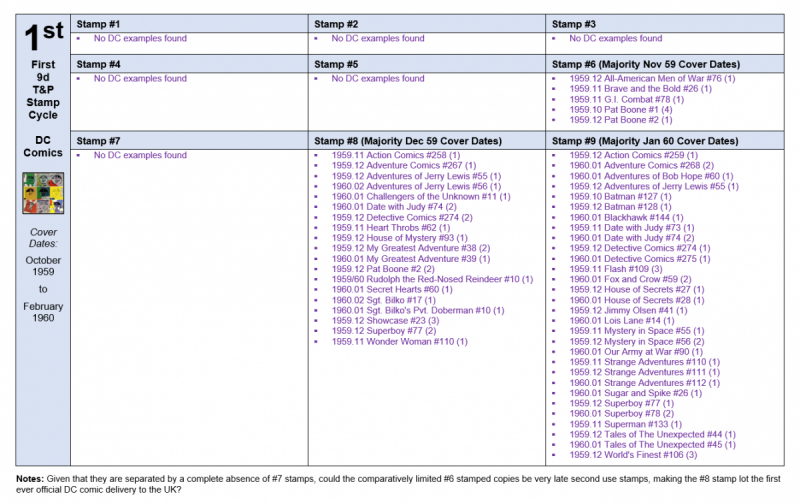 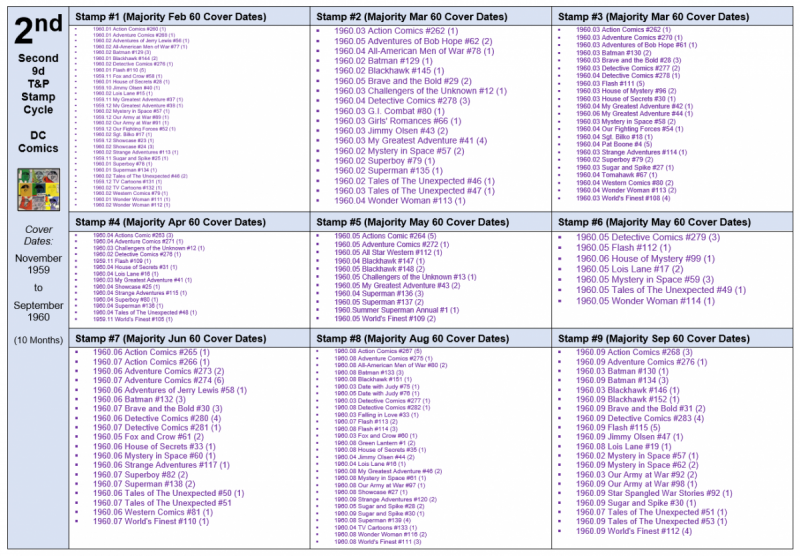 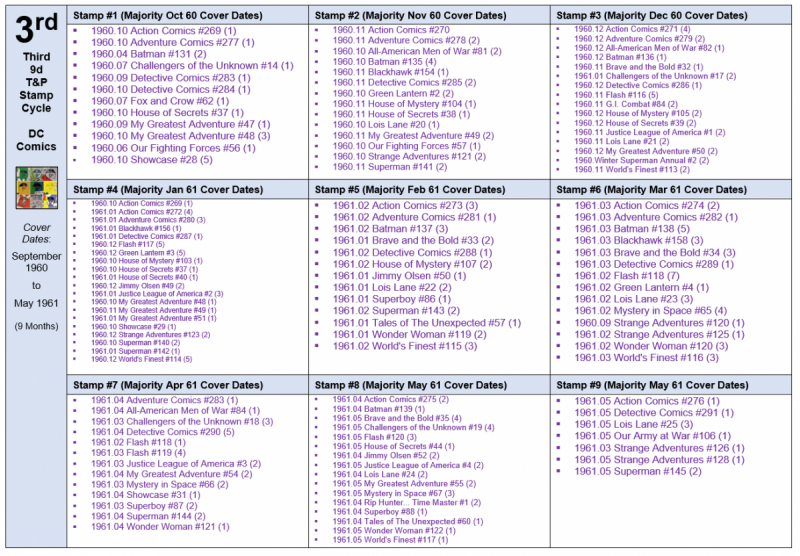 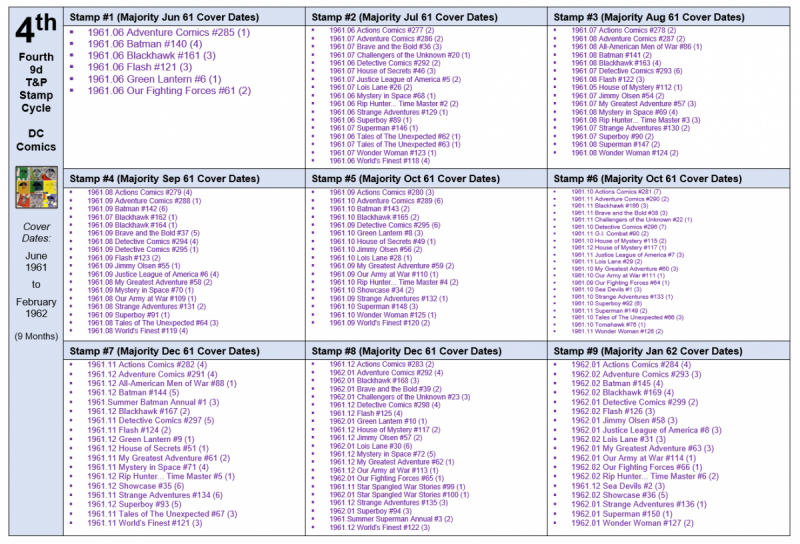 The tables show us that the books arrive approximately monthly - as you would expect for a monthly comic medium - and that each shipment comprises a mix of issue sequential books not usually separated by more than three months by cover date (which makes sense when you consider the end to end process involved from the point that issues were returned as unsold in the US to their arrival in the UK).

I'm not going to go into too much more detail here as I suspect that the vast majority of readers won't find this interesting. The small group that do will likely want to read the whole thread.

So, in a final nutshell, this is what we believe was going on:

The evidence points to the stamp number 8 in the first cycle as being the likely 'first ever shipment' and it probably arrived in the UK for the books to go on sale around January 1960.

As ever there are gaps and quirks all over the place - there always are in this wonderful period of comic history - but you'd have to be blind to not see the pattern behind the outliers. The discussion thread covers Marvel and the other publishers for whom we have T&P stamped examples in the UK.

So, with an element or two left to be finessed, notably a definitive calendar date for the start month, the mystery of the Thorpe & Porter price stamp numbering has, to my mind, finally been solved.

Well done to the Dude and Tatlock for making the breakthrough 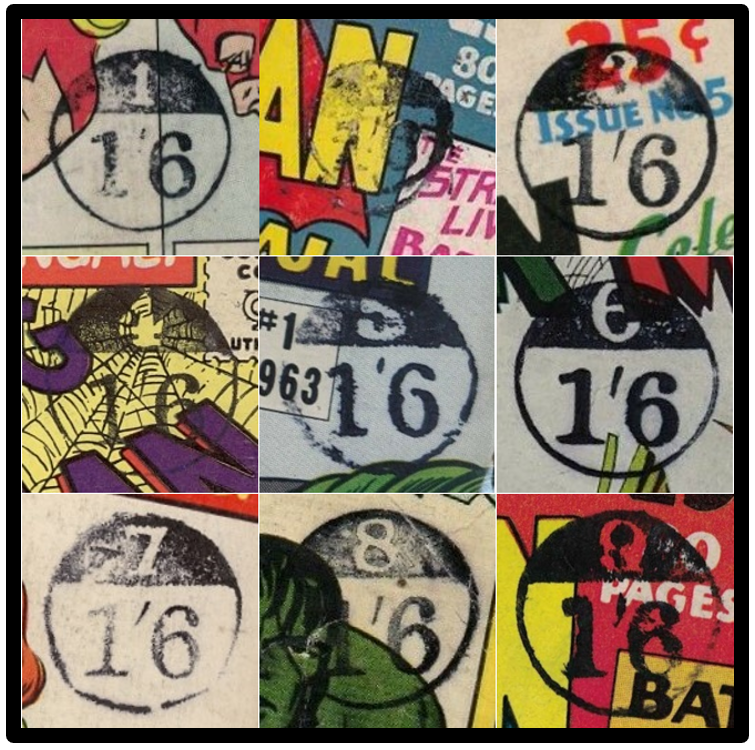 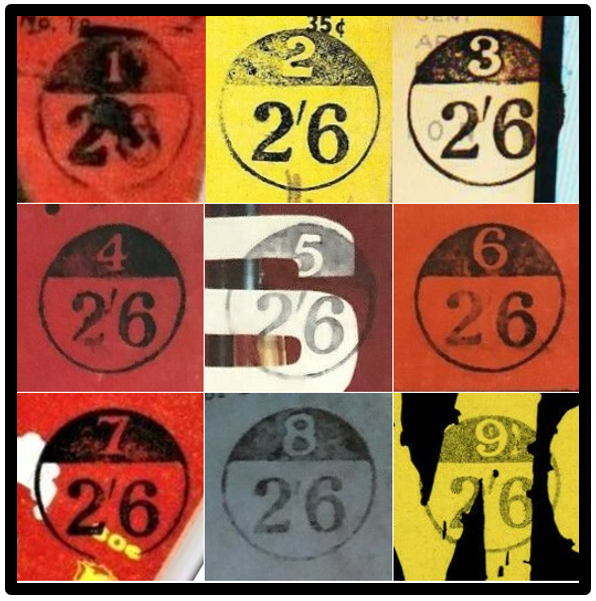 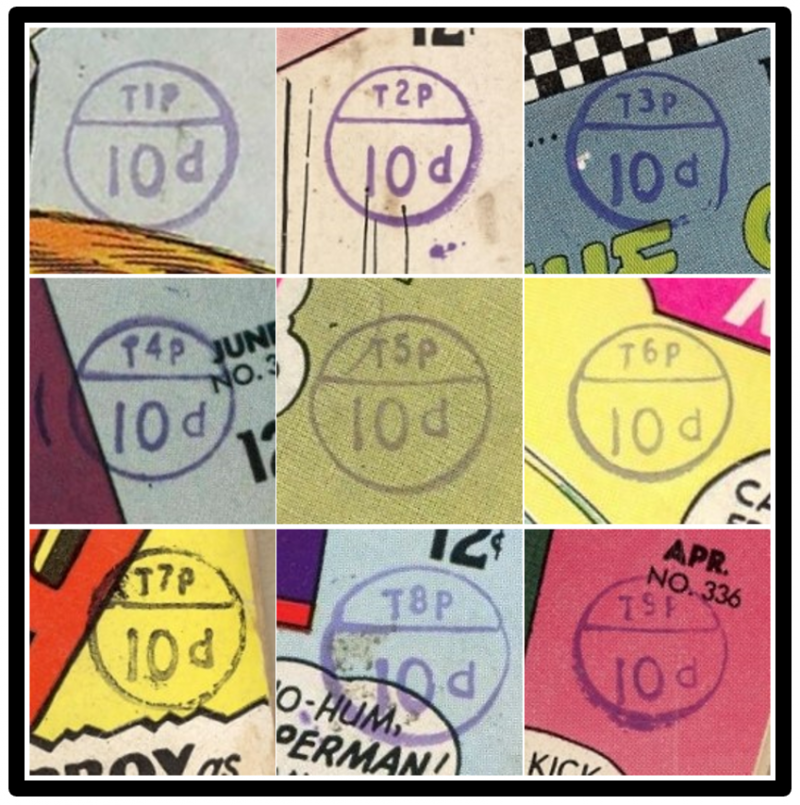 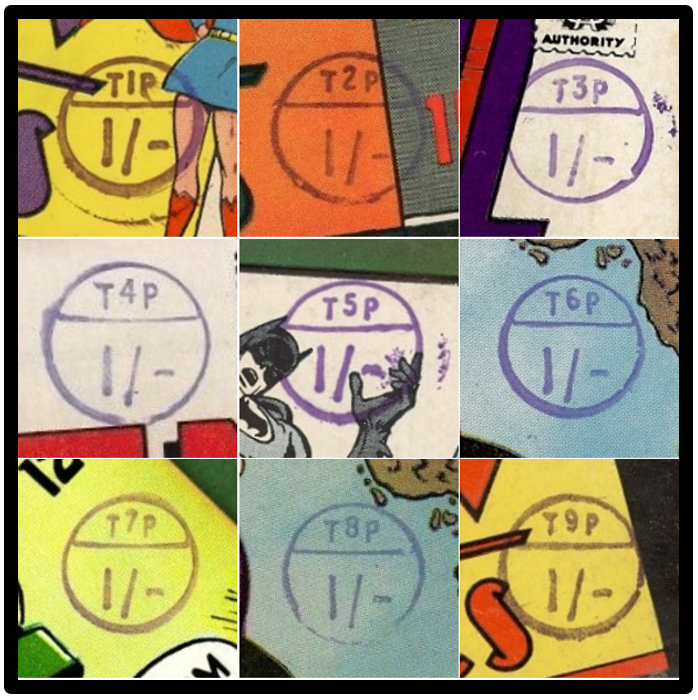 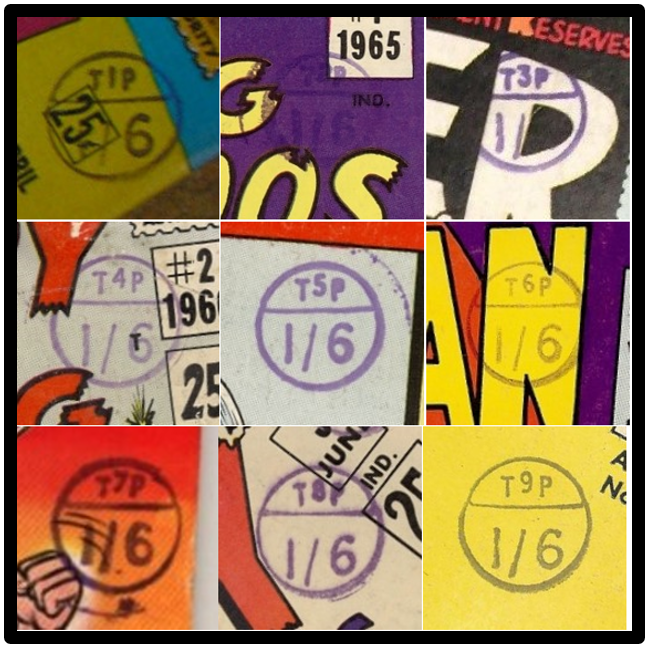