When you think of the Amazing Spider-Man title and the various reasons that make it one of the most collected titles in all of comics, you can’t help but to think of the rogues’ gallery of Spider-Man, which is considered by many comic book connoisseurs to be the greatest of all time!

With that being said, most of Spider-Man’s A-list super-villains 1st appeared within the classic Stan Lee/Steve Ditko run, which spanned from issues #1-#38, with the majority of them appearing within the first fifteen issues. However, after John Romita Sr. took over artistic duties beginning with issue #39, and just into his 3rd contribution to the title, he collaborated with writer Stan “The Man” Lee and created a new A-list Spider-Man villain-the riotous Rhino!

Depicted on the front cover smashing through solid stone with his brutish force, the Rhino’s colossal size coupled with his speed and nearly indestructible rhinoceros suit, make him one of Spider-Man’s strongest opponents!

Although the Rhino’s origin story isn’t disclosed until Amazing Spider-Man #43, his personal background is very compelling and deserves to be translated properly on the silver screen. For instance, on May 2, 2014, the Rhino (played by actor Paul Giamatti) made his debut appearance in The Amazing Spider-Man 2. However, after viewing the film, I was personally disappointed because it was like they just casually threw the Rhino into the mix to make the movie more interesting, from having Spider-Man battle multiple villains.

In my honest opinion, although I like the idea of watching Spider-Man defend humanity from more than 1 villain simultaneously, I am also a strong believer in sound character development that builds up intrigue in that particular character. Therefore, as a result of his initial portrayal in the Marvel Cinematic Universe, I believe the majority of the viewers perceived the Rhino as an insignificant Spider-Man villain with little substance, which is far from the truth.

In fact, according to the comic books, the original Rhino was created after two Russian scientists convinced Aleksei to undergo experimental chemical and gamma ray treatments, in which they fused a molecular rhinoceros adhesive to his body. In exchange for transforming him into the Rhino, Sytsevich agreed to work for the two scientists and their criminal spy network. This was a huge career advancement for Sytsevich, as he was previously a simple street thug executing dirty jobs for the Russian mafia and receiving minimal pay. However, after a series of events, the Rhino realized that he could work for himself and attacked the two scientists in their lab facility. The Rhino continued his life of crime and became a regular foe to Spider-Man, the Hulk and many others. He also became members of various crime organizations such as the Sinister Syndicate.

With the aforementioned background information on Aleksei Sytsevich that only scratches the surface in regards to his complete origin; the original Rhino clearly was NOT represented in The Amazing Spider-Man 2 film. Instead, the newer Rhino (controlled within a mechanical suit) was featured in the movie, which according to the comics, gets destroyed fairly quickly in a devastating one-on-one battle with Aleksei Sytsevich—the original Rhino!

Maybe one day we’ll get to see the original Rhino featured as a main villain in a future Amazing Spider-Man film? In the meantime, I’m very optimistic that prices for high-grade copies of Amazing Spider-Man #41 will continue to appreciate to new heights!

According to the CGC Census Report as of Tuesday, March 30, 2021, out of a total of 2,280 Universal copies graded, only a mere 20 copies were graded in 9.6! This ratio represents a ridiculous rarity factor of only 0.9% of the total population! Furthermore, there are only 3 copies graded higher in Universal 9.8, which are so elusive that only a single copy has surfaced for sale in the public market since January of 2006! Therefore, owning a CGC 9.6 white-paged copy is virtually the very best any high-grade ASM collector can attain!

This particular copy is WORLD CLASS in every way! For a book published in October of 1966, the staples are perfectly inserted and the colors are super bright! Structurally, this copy is PERFECTLY WRAPPED & CENTERED, which is another RARE aesthetic quality that you don’t see often.

I won this stunning original owner copy in Heritage Comics & Comic Art Signature Auction #7229 in May of 2020! It’s from The Variety Store Collection! Here is what Heritage Auctions had to say about this immaculate original owner collection:

“The Variety Store Collection originated in a small Midwest convenience store during the 1960s. The store’s owner, a second-generation immigrant, became interested in the comics that were circulating through his business. He was a lifelong coin collector who appreciated art, and that influenced him to begin collecting comics. He saved the nicest copies from his stock issues, many times multiple copies of the same issue, and stored them away, taking care to keep them in the excellent condition they are still in today. He did this until the mid-1970s when the store was downsized into a more manageable hardware-based business that no longer carried comics. In the early 1980s he began collecting again with his only grandson, and together they attempted to complete the different series runs. Time has passed now, as has the original owner, and his family has decided to offer this wonderful collection to others. Heritage is proud to present The Variety Store Collection for your consideration.”

I must admit that I almost folded during the final bidding battle, because the price already went up a few thousand dollars beyond my initial budget! However, with the pristine condition and rarity factor for this Silver Age ASM KEY within reach, I held in there and placed a few more bids and ended up the winner! I’m definitely honored to be the proud new owner of this gem! Thank God for payment plans! 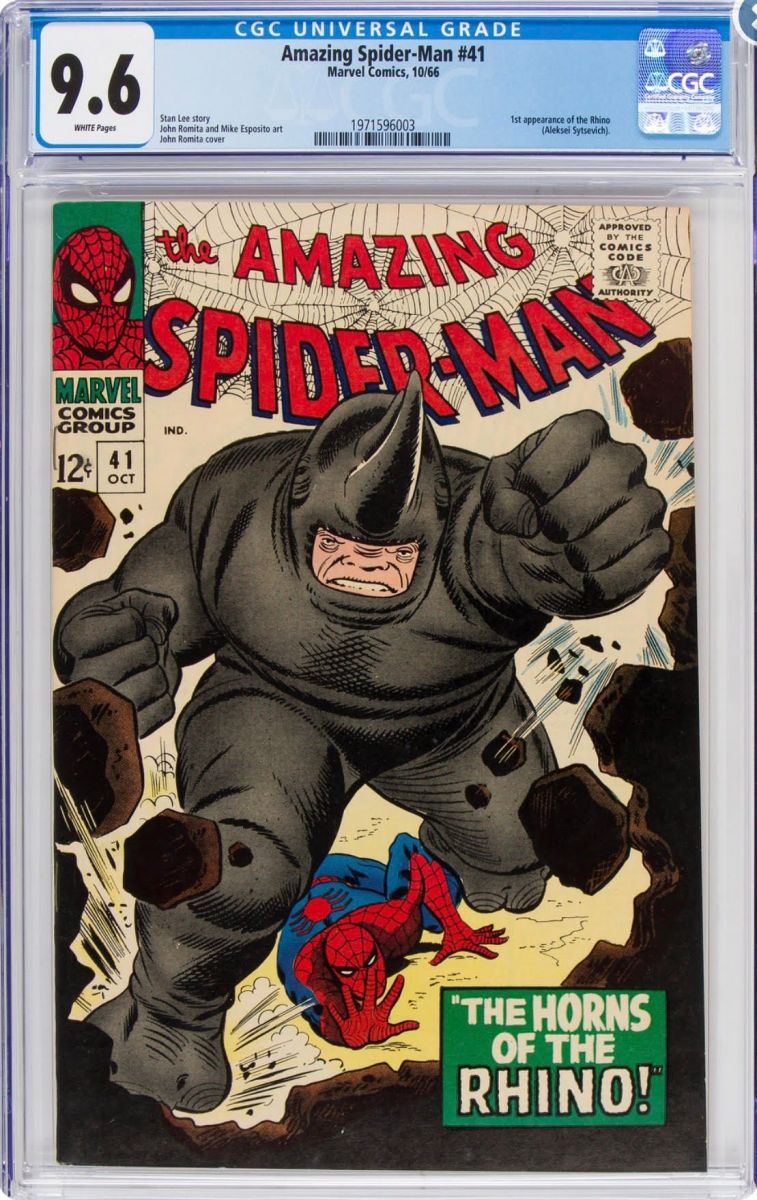 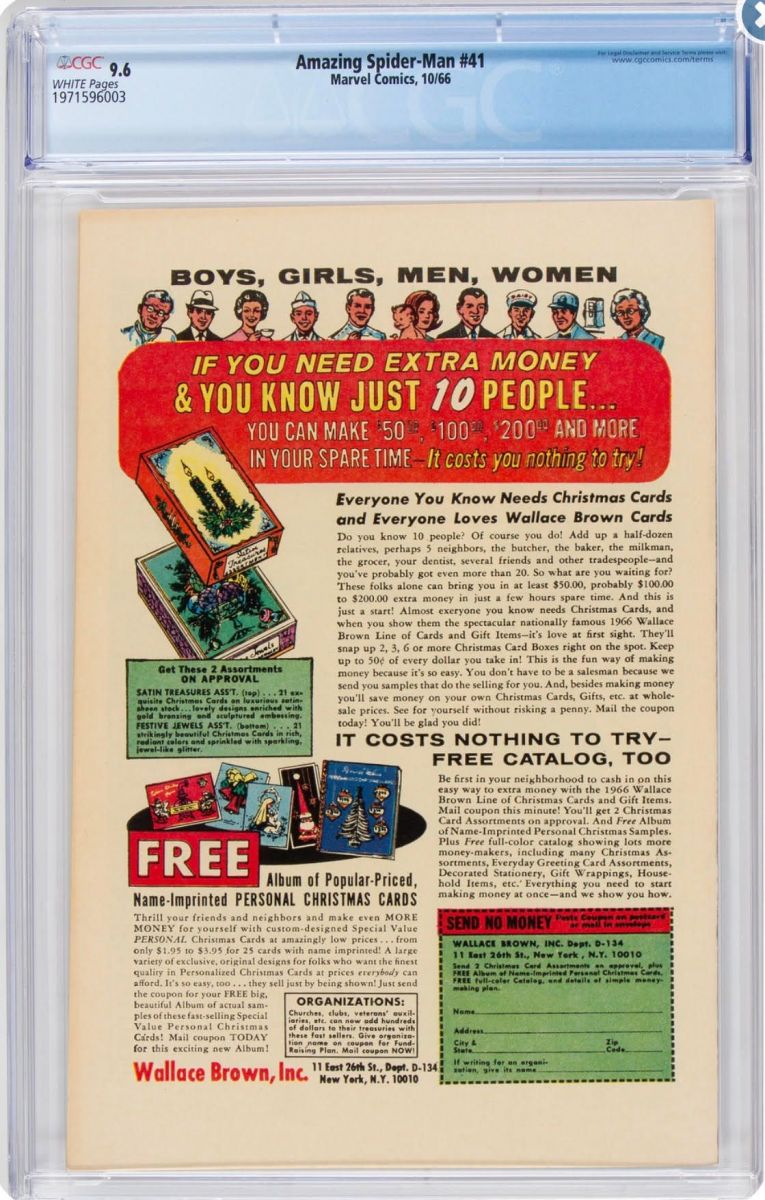