Incredible Hulk #181 showcases the 1st full appearance of Wolverine and his 2nd overall appearance in the history of comics!

Moreover, there are only a handful of comic books that have literally stood the test of time and have reigned over any other book of its era; Incredible Hulk #181 is one of those exceptions!

If you were to think of a single comic book to represent the most sought-after, most valuable and most significant issue of an entire age, it would be Action Comics #1 of the Golden Age (1938-1955); Amazing Fantasy #15 of the Silver Age (1956-1969); and Incredible Hulk #181 of the Bronze Age (1970-1984). In other words, the 1st appearances of Superman, Spider-Man and Wolverine have superseded the importance of any other character of their respective time periods!

With that said, the world was introduced to the claw-slashing, berserker-raged mutant Wolverine, who made a long-lasting first impression during his debut in November of 1974, as he battled the most powerful character in the Marvel Universe—the Incredible Hulk! However, Wolverine wasn’t anything like the major superheroes before him; instead, he was ill-mannered, hot-tempered and walked the earth with a tortured soul, as he would later struggle with his origins and the purpose of his creation. He was a government experiment—the perfect weapon—Weapon X! As a direct result, the “anti-hero” was born!

Wolverine was originally created by writer Len Wein and designed by Marvel Art Director, John Romita, Sr. However, in October of 1974; it was the late Herb Trimpe (May 26, 1939 – April 13, 2015) who first drew the character for publication in a last panel cameo featured in the Incredible Hulk #180. The following month, Wolverine was depicted on the front cover lunging in midair and slashing through heavy chains to attack the Goliath Green Machine! In my personal opinion, this is by far the most badass 1st appearance entrance in the history of comics! Wolverine battled the most powerful being in the Marvel Universe head on, so the story title, “AND NOW…the WOLVERINE!” served as an impact statement as if to say, “move over Hulk…another badass is in town to take on all challengers!” With that being said, Herb Trimpe’s classic cover of Incredible Hulk #181 forever remains etched in the hearts and minds of all Wolverine fans and collectors, and is easily recognized and revered worldwide by any comic book collector or connoisseur!

Roughly 8 months later in the Summer of 1975, Wolverine made his 2nd “full” appearance in Giant-Size X-Men #1 and became a major addition to the new X-Men team. While Wolverine was kicking a** and talking trash in the process, he became increasingly popular with avid X-Men readers and became the most popular character on the X-Men roster! From this success, Marvel would later feature Wolverine in his 1st solo comic; in a classic four-part miniseries, which was published from September – December of 1982. Fast forward a little over six years ahead, and Marvel finally catapulted Wolverine into his own monthly series in November of 1988! Furthermore, in the 43 years of his existence, Wolverine has become the most popular character in the entire Marvel Universe, next to the franchise’s marquee character—the Amazing Spider-Man!

To say that Hugh Jackman has had success towards making Wolverine and the X-Men a viable movie franchise would be a gross understatement! Rather, he has ventured into “legendary status,” with almost 2 decades of filmmaking and helping to contribute a Worldwide Box Office Total of OVER 5 BILLION DOLLARS! As a direct result, copies of Incredible Hulk #181 will only continue to appreciate and rise in value annually, making it not only the most coveted book of the Bronze Age to collect and showcase, but one of the most secure long-term investments!

According to the CGC Census Report as of December 12, 2017, out of an impressive total of 9,989 copies graded, only one (1) freak of nature was graded (WAY BACK in April of 2001) as a Universal MINT 9.9, which sold for $150,000 on Comic Link back in February of 2011! Furthermore, only one hundred four (104) copies (including my copy) were graded as a Universal 9.8 and only ten (10) copies were graded as a Signature Series 9.8. With these statistics in mind, the rarity factor for a CGC Universal IH #181 in 9.8 is only 1.04% of the total population! That’s extremely rare! Considering the vast number of copies that have already been professionally graded and the fact that many 9.8 copies are stashed away in private collections, it is going to become increasingly difficult to locate any 9.8 examples; raw or professionally graded!

On that note, this particular CGC 9.8 copy sports PERFECT COVER WRAP, PERFECT CENTERING, and PERFECT WHITE PAGE QUALITY along with being PERFECTLY cut! (okay, if you want to be a snob...99.9% perfect!

) The color saturation is deep and bright and the corners are razor sharp! Of MAJOR significance is the absolutely PERFECT CENTERING & REGISTRATION ALONG THE SPINE! It is extremely RARE even in the 9.8 grade to find a copy in this immaculate condition, which makes the Professor Pecora Copy of Incredible Hulk #181 one of the finest and most valuable copies in the world!

I purchased this PRISTINE GEM in March of 2017 from the same auction house where the single CGC 9.9 MINT copy last exchanged hands—Comic Link! I had to bid very aggressively in the final seconds of the auction to secure it, along with auctioning off the majority of my CGC 9.8 Bronze Age Marvel Key Collection in the Pedigree Comic’s April 2017 Grand Auction to pay for it, but at the end of the day...it was all WORTH IT!

In closing, I would like to thank Mr. Doug Schmell of Pedigree Comics for helping me to acquire this MEGA Bronze Age Key! 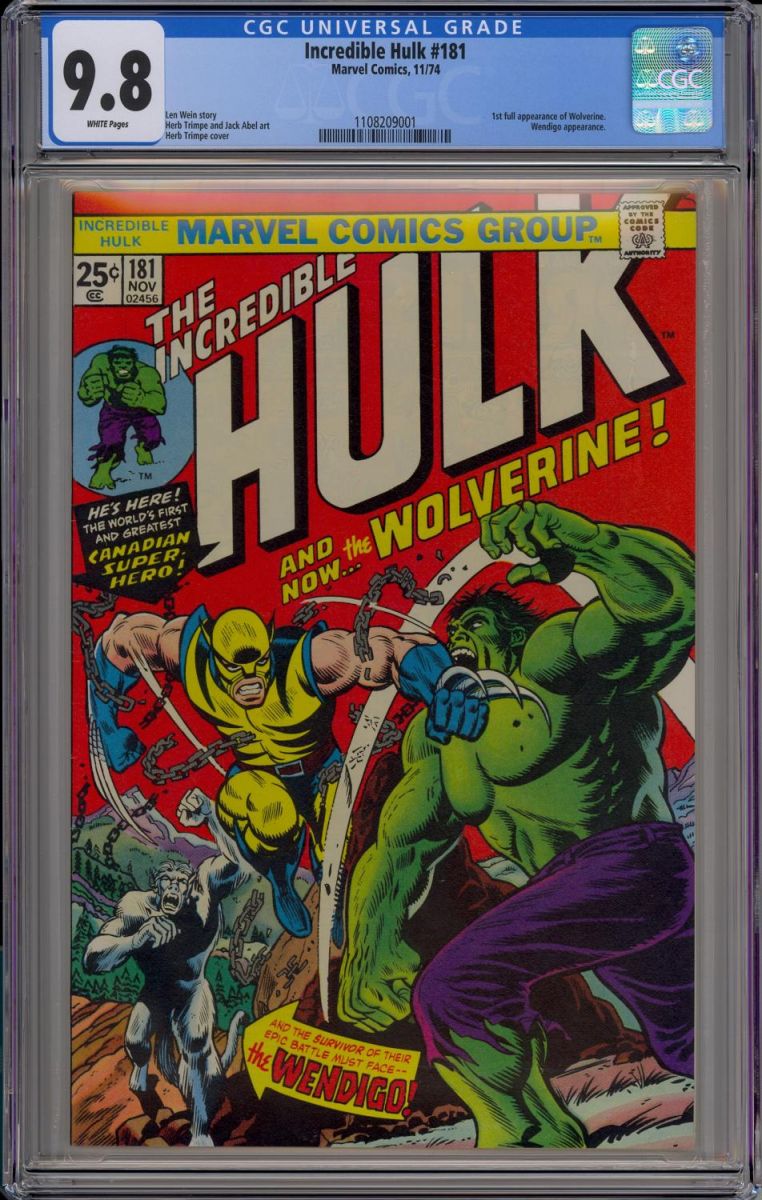 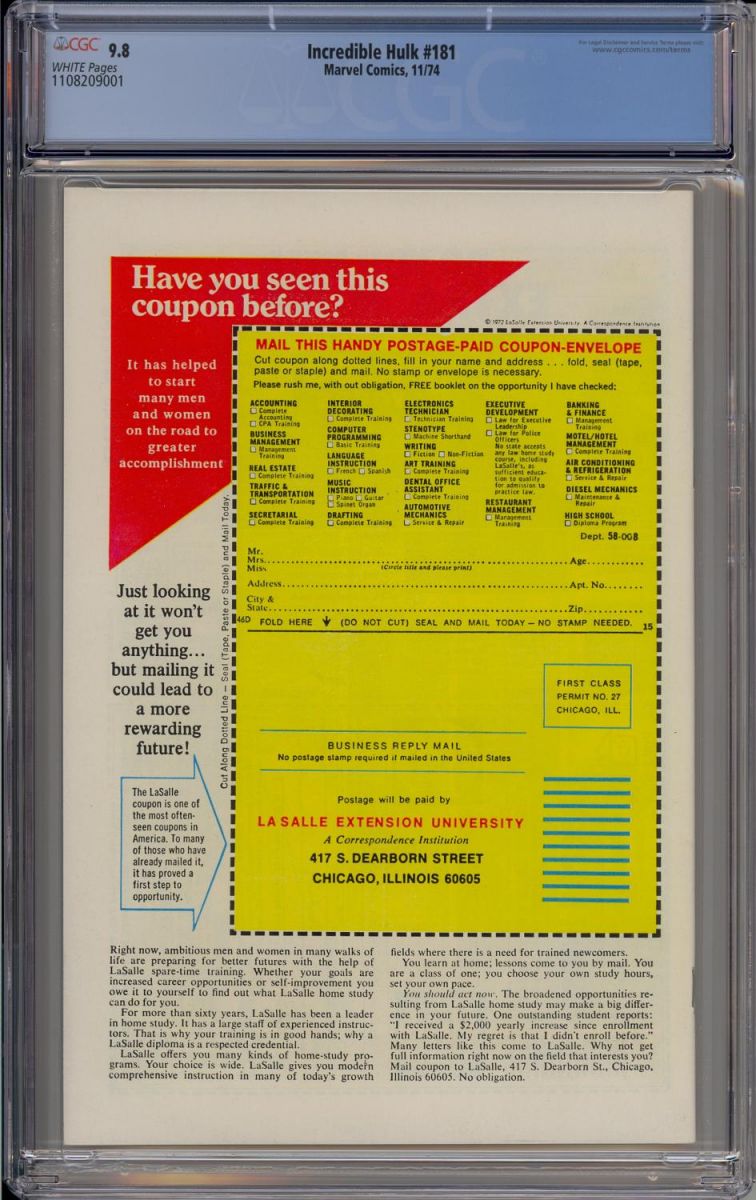