So yesterday was the first comic I ever read, and coincidentally enough, it was a Superman book.  What was the first Superman comic book I bought once I decided to start reading and collecting? 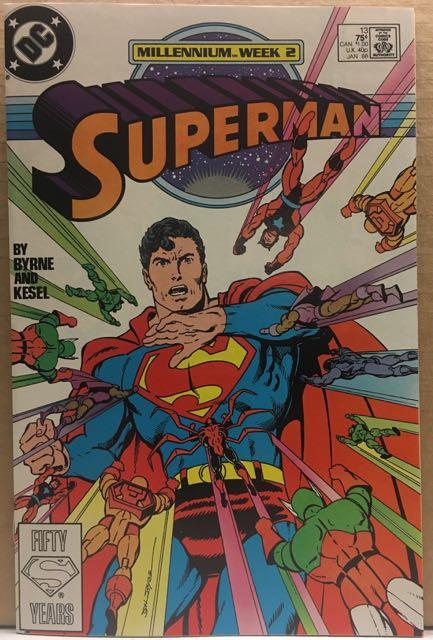 As I said in my first journal entry, I was pretty much a Marvel zombie for the first 7 or 8 years of my reading and collecting.  I remember getting the Crisis mini-series as it was fresh on the stands right when I started reading.  I was enjoying the heck out Secret Wars which had just wrapped up, and was expecting another tale in that vein.  Needless to say, I was a tad overwhelmed with all the characters I was unfamiliar with.  I think I was confused, yet fascinated, at the same time reading this series.  It didn't hook me like Secret Wars did, but I would eventually come around and that title remains one of my most common re-reads to this day.

So back on track to this issue.  It's funny, as I read the Crisis mini-series but never bought any of the tie-ins.  Here, I don't own the Millennium series, yet a have several of the tie-ins.  I guess my OCD with collecting hadn't hit full bloom yet in late 1987.

For those keeping score at home, so far we've hit Garcia-Lopez, Adams, Perez, and Byrne...all in their heydays.

Anyway, I bought this issue...read it...and then filed it away, quickly going back to the X-Men and Avengers.