Had a great time at this year's SDCC, despite having been able to attend only the Sunday last day events. Highlight for me was being able to bring my entire family along this time. Kids had a blast; my 12 year old son was able to get for himself a Simpsons convention edition TPB, with a personalized autograph and note from none other than Matt Groening (he's a big fan), and my other 10 year old son had a great time getting into the Back to the Future Delorean display (he also had a nice opportunity to be interviewed in what looks like a segment for a Michael J Fox foundation clip).

That said, I'd noticed that I actually spent significantly less this year than my last SDCC attendance (in 2009). I guess partly because I only spent a day (and the last day, at that!) though some of the retailers I'd spoken too did mention that this year wasn't so successful sales-wise than previous years. Spent almost the entire day browsing through the Golden & Silver Age sections, some key books I'd wanted to get were either simply unavailable, or priced way above my budget (I'm still drooling over the 'highest in grade' Dell Four Color 596/Turok #1 and Four Color 686/Turok #2 displayed in the A-1 Comics booth, just couldn't afford the > $7K price tag). Still managed to score myself a few nice raw books - including about a dozen silver age Marvel Avengers and a handful of silver age Gold Keys (e.g. Star Trek) from Tomorrow's Treasures, at first glance appearing to be in Fine+ condition or higher, for about $5 - $10 each. Plus a handful of raw Dell Turok Son of Stone cover price variants from A-1 Comics and Terry's Comics (which I've been looking for, for years!), and a nice 9.2 CGC slabbed/graded copy of Dell Turok at slightly below guide.

Another thing which 'made my day' this week was the very pleasant surprise of finding out that my silver age Turok set had been recognized by CGC in this year's Registry Awards. I think my dad, who accompanied us to this year's event, was equally elated (he's a Turok fan himself, who brought me into the hobbly in the early 70's, and I dont think he actually realized that I managed to complete the set over the last several years!). It's truly a great honor to be counted among the best sets out there (still reeling from the shock), and I'd like to congratulate all the winners in this year's awards.

Flying back home tomorrow, and will be spending the next several weeks/months sorting through my purchases (and budget!) and submitting a subset for CGC grading. Not sure if I can attend subsequent SDCC's in the future (i.e. I heard that ticket prices are increasing significantly), but who knows?

All for now. Happy collecting! 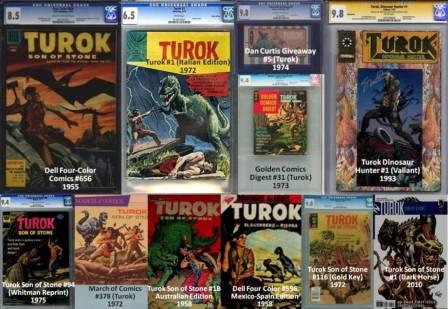