I picked up a couple of early 12¢ Action Comics off of eBay recently to help fill out the run. 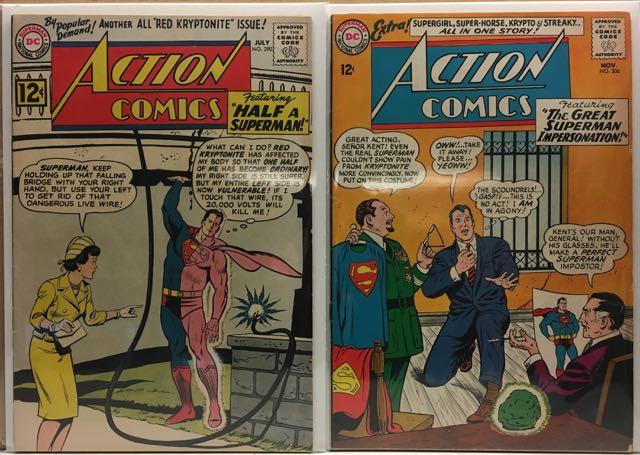 I realized long ago that trying to fill out a run of both Action Comics and Superman was going to be a herculean task at best.  With that in mind, I settled on a minimum grade for the 12¢ books to be at least a nice presenting F/VF.  I'll obviously make exceptions, however, if I come across some beaters at a price I can't resist.

I love that cover for #306, as it tells a hell of a story with just one image.  It's got it all...Clark Kent in peril, kryptonite, a 3rd world generalissimo, a cigarette smoking mastermind, the secret identity in jeopardy, etc...  If I can't have world-shaking super-villain fist fights, than these are the type of stories that I really enjoy from the Silver and Bronze Ages.

Anyways, on to the anagram fun!

Let's see...Clark is essentially the clerk that handles the routine duties for the tank that is Superman.  I'll buy that.  Fun fact (and  a peek behind the curtain): I use the internet to figure out my anagrams, and so far "Clark Kent" are the letters that have generated the least amount of anagrams, with only 3 total.  That man's in a class by himself!

My spanish is rusty, but that means the alien, right?

That makes a lot sense, seeing as how this title birthed the original superhero!