Yesterday we took a look at the dawn of the Bronze Age with the Superbooks.  It would be about another year, however, for the Superbooks to start hitting their stride with some classic Bronze Age goodness.  For me, the quintessential Superman Bronze Age book is Superman #233, so let's see what else was on the newsstands that month as well. 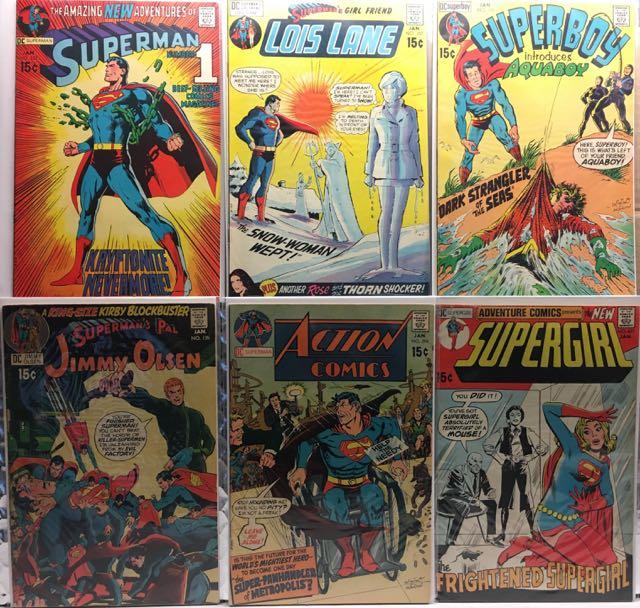 Aside from having the most iconic of Neal Adams' Superman covers, this issue starts a year-long story of a de-powered Superman by Denny O'Neil.  While this was supposed to reset the status quo, it was largely contained within the pages of Superman and lasted only as long as Denny O'Neil stuck around.  Those eleven issues are now affectionately known as the Sand-Superman Saga.  It has its rightful place in Superman history, but honestly...80% of the reason is that cover!

Superboy #171 has one of the better (and all too rare) Carmine Infantino Superman covers.  Great stuff!  I'm not much of an historian for Aquaman, but was Aquaboy ever really a thing?

Jack Kirby was just getting started on his Fourth World epic, and we get Darkseid's second appearance here in Superman's Pal Jimmy Olsen #135.

...and is that another cover in the "people vs. Superman" theme on Action Comics #396?  Suddenly he's the Rodney Dangerfield of super-heroes.

Another decent month in the world of Superman!