So I'm back from vacation with a new post!  Actually, I got back from vacation a while ago, but work has been busy and it's been creeping into my off time.  It'll probably be that way for the remainder of the year, so no weekday posting with any sort of regularity until the new year.

The busier work schedule did come with one silver lining, as it took me to a side of the state that I don't normally get to, and that means new and exciting comic book stores to check out!  And find one I did...

It's the type of store I love, as I was greeted by the sight of dozens of long boxes laid out down the center of the store.  It's the rare store these days that carry a wide range of back issues.  Tardy's had the pre-requisite dollar boxes, but also a nice supply of copper/modern, bronze, silver, and even a few short boxes of the nicer Silver and Golden Age stuff!  If you are ever in the area stop in and say hi, as Gavin was exceptionally nice and welcoming, and he was willing to do a little wheeling and dealing to get a deal made.

So what did I get?

I picked up a mid-grade Superman #155 for my pre-Adventure Comics #300 Legion collection.  I'm now just 3 books away from polishing that one off.  I also upgraded my beat-to-heck copy of New Gods #4, which means that my DC Kirby collection is now all mid-to-high grade.

Most exciting of all, however, was the chance to upgrade one of my favorite Silver Age Superman stories...Superman #149 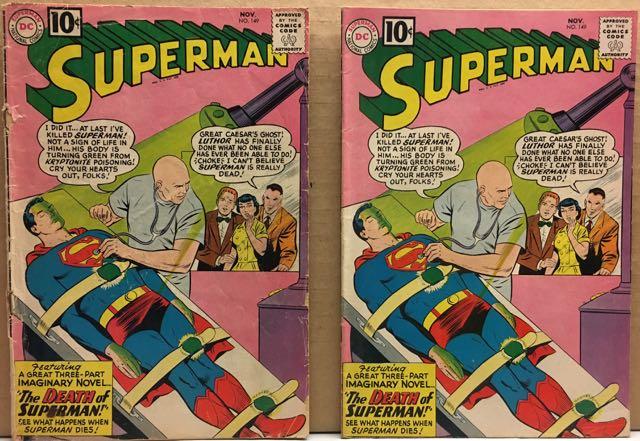 The beater copy on the left I got for a five spot at my local LCS.  I paid a bit more ($75) for the upgrade, but you have to step up for the quality, eh?

If you've never read this issue, it's a great "full length novel" that tells an imaginary tale of the Death of Superman.  It had to be imaginary, as who would ever think of killing Superman for real, right?  It's also a great cautionary Lex Luthor story, asking "can a leopard really change his spots?"

In this day and age, I imagine this story would be a year-long sub-plot running through all of the Super books, but back in the day it was done in one.  Speaking of which, isn't Lex currently reformed and playing the role of hero? Hmmm...

This book is also the last 10¢ issue, before they raised the price up 2¢ with issue #150.  Do you think was just random timing back in the day, that the price hike landed on an anniversary issue?  Where anniversary issues even a thing yet?

Oh well, a mystery for another day perhaps.

Enjoy your own upgrading!