I am sure this has happened to most collectors out there. You win an auction or make a purchase of an awesome comic at a great price and the seller refunds your money the next day. I had this happen twice in the past few weeks. Once on Ebay and the other on a dealers website.  The first one was on Ebay and it was an auction for an Avengers 24 CGC 9.6 signed by Stan the Man himself. I won the auction with some stiff competition at the end. I could not wait to get this comic but the following day the seller refunded my money with no explanation except the standard Ebay ( This item is no longer available.)

I have had this happen before. The last guy said he spilled coffee on a book I bought. Another said he lost it and so forth. I asked the guy who spilled the coffee to send the book anyway  and he then said he threw it away.  This seller last month did respond to my email and said he had his house broken into and this book was stolen.  He said most of his other books were at his work and they were ok. He said only a few books at his house were taken and the police were not interested in the crime as it was only comic books taken. He did however say the next purchase I make from him would be free shipping.

The other comic was a Journey Into Mystery 90 7.5 CGC on a well known dealers website.  I bought it on a Thursday as I saw his con schedule he was at a Wizard world con the next day and I thought maybe he would take it and sell it there.  He sent a refund on Saturday am and said( he had sold this book sometime before and it fell through the cracks). The funny thing was that the book disappeared right off his website instantly just like the one I had purchased a couple of weeks before did.  He also offered free shipping to me on my next purchase.  I can only hope the dealers stories are legit but really there is no way of knowing for sure.  On a brighter note a Journey Into Mystery 91 7.5  I bought recently did arrive as expected and it's picture is attached.  Well that's all for now. 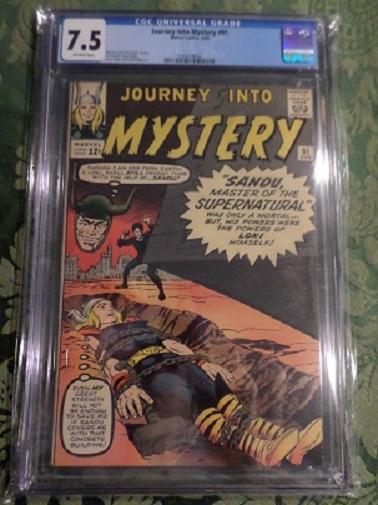