The scarcest Marvel Bronze Age Grail in top CGC grade is now a part of the Professor's collection!

I just finished adding my newly acquired X-Men #94 CGC 9.8 to my CGC Competitive Set, and wanted to document this major acquisition in a new journal post!

Therefore, please enjoy the following front cover scan and complete commentary on my new pride and joy in the collecting world!

X-Men #94 showcases the 1st New X-Men issue since X-Men #66, which was published back in March of 1970! After roughly 4.5 years of recycled X-Men stories, spanning issues #67 through #93, and with the X-Men title on the verge of its demise, writer Len Wein and artist Dave Cockrum introduced a new X-Men team consisting of "adult" mutants from around the globe!

This was a momentous event that occurred in the summer of 1975 in Giant-Size X-Men #1! For the first time in history, the world was introduced to the dynamic characters of Storm, Nightcrawler, Colossus and Thunderbird! In addition, Giant-Size X-Men #1 also showcased the 2nd full appearance of Wolverine, who was also featured for the first time in his iconic yellow and blue suit with the extended face mask!

It was a scorching hot summer in 1975, as the new X-Men team was born, which would not only revitalize the X-Men title, but would catapult a major cult following in the comic collecting community. Due to the diversity of the characters originating from various countries on different continents, thousands of X-Men collections would eventually be spawned worldwide in the years to come, and the X-Men title would later evolve into an international franchise!

This movement inevitably ignited the demand for more new X-Men stories by the fans, which prompted legendary writers Len Wein and Chris Claremont, along with the artistic team of Dave Cockrum, Gil Kane and Bob McLeod, to launch the "official" All-New, All-Different X-Men series beginning with X-Men #94 in August of 1975!

Moreover, out of ALL the major Marvel Bronze Age Grails, X-Men #94 is and will always remain the scarcest in CGC 9.8, due to the dark green and partial black ink that surrounds about 75% of the cover! For instance, let's compare the statistics of CGC 9.8 graded copies of X-Men #94 to Giant-Size X-Men #1, Incredible Hulk #181 and Amazing Spider-Man #129.

We will begin the analysis with X-Men #94. According to the CGC Census Report, as of 7/23/13, out of a total of 3,631 copies graded, there are only eighteen (18) copies (including my copy) graded as a Universal 9.8! Also, there are currently zero (0) copies graded as a Signature Series, Qualified, or Restored 9.8.

In contrast, Giant-Size X-Men #1 has a total of 4,310 copies graded, with a staggering ninety-five (95) copies graded as a Universal 9.8, four (4) copies graded as a Signature Series 9.8, and one (1) copy graded as a Restored 9.8! Out of the 4 Bronze Age Grails discussed here, this one will remain the most abundant in CGC 9.8, hence why I have chosen to acquire this book at a later time in my collecting career!

With this information in mind, rudimentary economics tell us that due to the high demand and very low supply available, that X-Men #94 in CGC 9.8 will most-likely either maintain its marketing sales trend, or even exceed overall sale prices compared to its Bronze Age Grail counterparts! Although several recent X-Men #94 CCC 9.8 sales realized between 6K and 10K, make no mistake that this trend is NOT the norm and prices WILL demand much more in the near future, especially when the time arrives when you hardly see a 9.8 example surface on the market, due to collectors (such as myself) tucking away their copies in private collections! Therefore, if you are an X-Men fan or collector, or seeking the highest-graded Bronze Age Grails, X-Men #94 should be your TOP PRIORITY!

In terms of the condition of my 9.8 example -- it is one of the best copies in existence--period!! Although I prefer my books not to show any part of the back cover from the front, I made an exception with this copy, because the white strip to the left is PERFECTLY STRAIGHT and actually coordinates well with the cream, white, and light blue colors on the cover! Further, all of the previous 9.8 examples I have seen up for auction also show parts of the back cover from the front view, but those examples were not perfectly wrapped, like this copy is!

In addition, the color gloss is extremely bold and vivid--it looks like this book arrived straight off the printing press yesterday! Also, the corners are razor-sharp coupled with a perfectly solid spine devoid of any minor spine stresses, with the staples perfectly inserted in the right location! So once I saw this book listed on eBay, I told myself, "THIS is the example that needs to be showcased in The Professor's collection!"

In closing, I would like to personally thank Mr. Robert Letscher II of KEY Comics and Mr. Doug Schmell of Pedigree Comics for helping me to acquire this MEGA Bronze Age KEY! 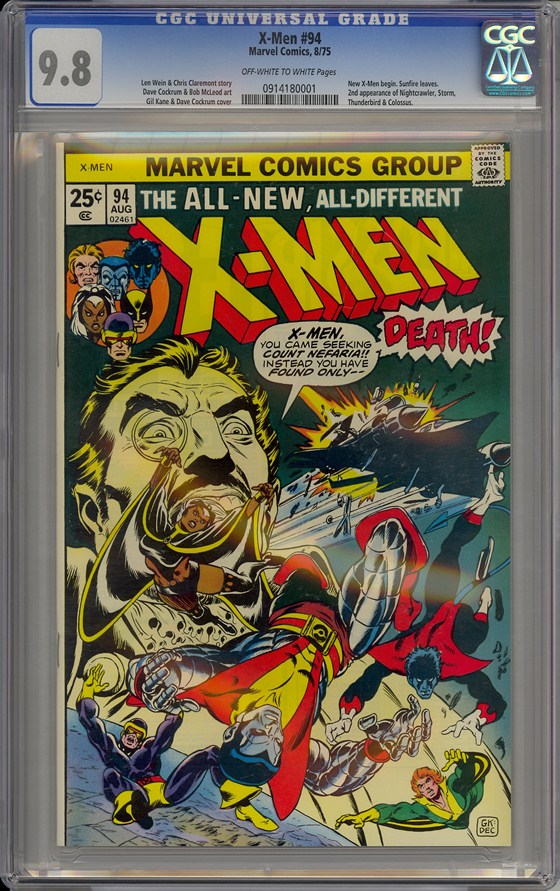