Hello everybody, this journal post is the follow-up to my previous journal regarding my X-Men #94 CGC 9.8 acquisition.

With that said, please enjoy the front cover scan and my commentary on the historical and cultural significance of X-Men #95! RIP to the Apache Warrior...Thunderbird!

X-Men #95 showcases the 3rd appearance of the new X-Men and the "death" of Thunderbird!

Moreover, killing off a major character was unheard of until June, 1973, in the Amazing Spider-Man #121, when Gwen Stacy was killed by the Green Goblin! Then, to keep the fans on the edge of their seats, Marvel Comics decided to kill off the Green Goblin in the following issue!

These tragic events truly set the "tone" for the Bronze Age of Comics, as it ushered in a "dark reality" of life and presented the readers with severe situations and tragedies, which the main characters had to learn how to cope and manage their emotions, while moving on with their lives.

Fast forward 2 years and 4 months after the Amazing Spider-Man #121 was published, and only into the second new X-Men issue, Marvel decided to shock the world again by killing off Thunderbird, whose government name was John Proudstar! Thunderbird's tenure with the X-Men was truly short-lived, as he was an original member of the new X-Men team who made their debut in the summer of 1975!

His background was that of the Apache tribe, in which he was born into at Camp Verde, Arizona. After lying about his age, John Proudstar joined the US Marines for a two-year tour of duty. When he returned to his Apache tribe, John found himself bored and at times depressed, and would use his super speed and mutant strength to chase and wrestle down herds of buffalo to pass the time!

John was eventually called back into duty by the US Marines; he won several medals of honor and was eventually released on honorable discharge. However, upon his return home, he was informed that his mother was diagnosed with chronic lymphocytic leukemia, a terminal form of cancer, by Doctor Edwin Martynec of Arroyo Medical Laboratory. After he was informed by Michael Whitecloud, John's reporter friend, that something was severely wrong with his mother's diagnosis, John Proudstar decided to investigate the Arroyo Lab and Dr. Martynec's practice. To John's surprise, he discovered that his mother was in perfect health and that Dr. Martynec was using completely healthy human subjects for his own illegal research on genetic enhancement! Further, it turned out that Dr. Arroyo was a wolfman creature himself, but John's maturing mutant powers were sufficient enough to get everybody out of the lab to safety, before Dr. Arroyo detonated his labs to cover his escape!

While living back at Camp Verde, John had more time to reflect on his battles in the war, which made him extremely conscience of how his Apache tribe and other Native Americans were killed off by the "white man." With the hypocrisy of Dr. Arroyo recently uncovered, John became extremely bitter and angry towards life!

It was during this self-destructive condition, when Professor Charles Xavier discovered John and offered to make him a member of his 3rd X-Men team. Although John was reluctant at first, because of his personal views about working for a "white man," John accepted the position and took on the superhero name "Thunderbird!"

After completing his first successful mission with the X-Men, Thunderbird started to argue with his team members over non-significant issues, and often clashed with Cyclops--his team leader, and would even question Cyclops' authority! He allowed his anger to get the best of him, and Thunderbird became ill-mannered and took things extremely personal--therefore throwing off his team's positive energy and spirit of unity, which made the other X-Men feel uncomfortable around him.

Further, Thunderbird always felt like he had to prove himself and often compared his abilities to the other X-Men--especially Wolverine, as he wanted to be the best! While he would remain tense and competitive, the other X-Men would take time to relax after their previous missions. The result was that Thunderbird was on the edge of exploding at any moment; it was just a matter of "when?"

After asking Iceman to provide him with a tour of the mansion, Thunderbird was let down from a very rude Iceman, because he disliked the idea of newcomers entering "their" sacred grounds. Although Thunderbird would be willing to "fight" to get into the mansion, just like potential UFC fighters have to fight in order to get into the fighter house on the Ultimate Fighter, Thunderbird didn't even have to break out a sweat, as almost all of the original X-Men decided to quit and leave the mansion in order to pursue "regular" lives.

Now that Thunderbird was in the mansion, it did nothing towards quenching his thirst towards outdoing the other X-Men. His over eagerness caused him to become careless, which was the reason he injured his leg during a Danger Room session! From this event, Cyclops refused to take Thunderbird on another mission, because his actions proved to be erratic and harmful to both himself and his team members.

It was now time for the new X-Men to begin their second mission, which was located at Cheyenne Mountain in the Colorado Rockies. This was the location of a North American Air Defense Command Center that was ruled by Count Nefaria. Although Cyclops would have preferred for Thunderbird to have stayed behind, he allowed him to be a part of the mission, as he was still part of the team.

After the X-Men arrived at the mission location, Count Nefaria managed to escape in a small aircraft. However, Thunderbird used his mutant powers and leaped onto the plane in an attempt to capture Nefaria and claim the glory of single-handedly completing the mission!

However, Banshee tried to warn Thunderbird with these exact words, "For God's sake, Laddie--GET OFF THE PLANE!" Moreover, Professor X also tried to communicate with Thunderbird telepathically: "John Proudstar, GET OFF THE AIRPLANE BEFORE IT'S TOO LATE!"

As quoted from the actual comic, this was Thunderbird's response to Professor X:

"Butt out, baldy--I'm thru takin' orders! I've been a loner all my life, Xavier--dumped on by everyone I met--But I'm a man Xavier, a Warrior of the Apache--an' TODAY I'M GONNA PROVE IT!"

Shortly after these last words, the plane exploded and Thunderbird died, while Count Nefaria survived!

Unfortunately, Thunderbird could have avoided his untimely death, but due to his warrior pride and ego, he chose not to listen to the instructions and warnings of his team members...and the cost was his life!

It seems that John "Proud"star was a bit too proud for his own good! His brother James (Warpath) would eventually take over the Thunderbird name, and John Proudstar would eventually be resurrected by Eli Bard, but this event ventures way beyond 1975, so I'll end the discussion here!

What a story and superb character development by Chris Claremont! It's stories like this that m 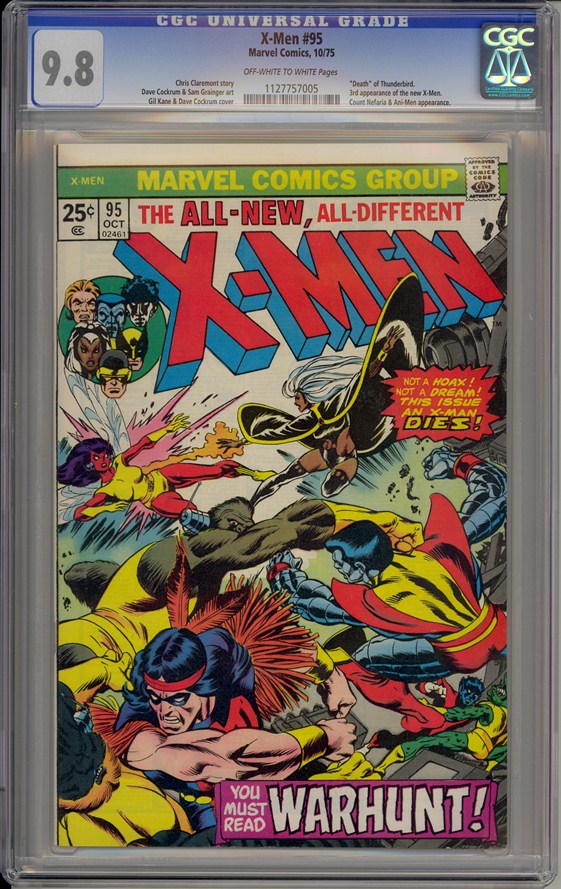