Out with the old, and in with the new! X-Men #100; the classic cover that Dave Cockrum drew!

Although I actually acquired this gem along with my X-Men #97 CGC 9.8 about two months ago, I finally completed my commentary on it for your reading pleasure!

Moreover, I have decided to catalog all of my acquisitions in the order in which I actually attain them, so although I have another major book I would like to write about NOW (as it just arrived last night), I am going to hold off in order to maintain accurate journal acquisition logs!

With that said, please enjoy the following commentary and the high-resolution scan of X-Men #100 CGC 9.8!

X-Men #100 showcases a classic Dave Cockrum battle cover between the old X-Men and the new X-Men!

As I mentioned previously in my commentary on X-Men #97, I LOVE battle covers! Therefore, this cover is one of my personal favorites in the entire run!

So what defines a cover as "classic?" To answer that question, just like any classic song in the music industry, it has to transcend time! On that note, X-Men #100 has made a lasting impression throughout several decades, as it has been reused for the following covers: Uncanny X-Men #134, Defenders #100, New Warriors (v.4) #14, Thunderbolts #172, Secret Invasion: Front Line #5, Nova #24 and Avengers Academy #38. Now that's a lot of cover swipes!

Further, just as a popular musician will play their rendition of a classic song, various cover artists have recreated their versions of X-Men #100 with different characters specific to each title! With that said, God Bless the late Dave Cockrum who passed away on November 28, 2006! He would be honored to know that his creation has been reproduced by a multitude of inspired artists!

In terms of the actual condition of this 9.8 example, it is perfectly wrapped along with unblemished white page quality! Moreover, when I first saw this copy at auction, what really prompted me to ensure I won this beauty (aside from loving the classic battle cover), was the superb centering and the razor sharp edges! You could cut someone with those corners! :-)

In closing, please enjoy the complete synopsis of this issue, which was retrieved from: http://marvel.wikia.com/X-Men_Vol_1_100. Please note that I edited various parts of this synopsis to meet my posting standards!

Aboard the space station run by the anti-mutant Project: Armageddon, it's leader Stephen Lang seemingly has control of the original X-Men (Cyclops, Angel, Iceman, Beast, Marvel Girl, Havok, Polaris and Professor X) and has ordered them to kill the new team (Storm, Wolverine, Nightcrawler, Colossus, and Banshee). As the battle rages on, the new team of X-Men find some interesting inconsistencies from those that they are fighting; the original team seemingly has no memory of their replacements. Further, the Beast isn't covered in blue fur and Cyclops is wearing his old visor.

As they fight on the defensive, Wolverine decides to take the battle to Professor X and is caught off guard when the Professor stands on two legs and knocks Wolverine out in one punch! Then, Marvel Girl uses her telepathic powers on Wolverine, but he finally realizes that they have been distracting him from using his enhanced senses. Without any hesitation, Wolverine strikes at Marvel Girl, revealing that she is not the real Jean Grey at all, but a robot.

This angers Lang, as he had created his army of X-Sentinels to be unbeatable duplicates of the original X-Men to exterminate other mutants. Lang explains to the captured Cyclops, Professor X, Jean Grey, and Peter Corbeau how he was a member of a government project organized to determine the cause of mutants.

Moreover, having developed hatred against the mutant race, he would utilize the Sentinel base once owned by Larry Trask and go over the notes there to build his own Sentinels. Making a deal with a clandestine organization calling themselves the Council of the Chosen, Lang was given the funding he needed to begin "Project Armageddon" to devise a means of eliminating mutants. While Lang has been ranting, Cyclops uses the opportunity to blast through his confinement with his optic blast and then frees the others.

As the X-Men in the other room destroy the Sentinel doppelgangers of the original team, Cyclops attempts to knock out Lang. However, Lang manages to flee to his gunship and attempts to kill Cyclops, however, Jean uses her telekinesis to mess with the controls and forces Lang's gunship to crash into a view screen and explode, seemingly killing Lang in the process. With the space station compromised and about to blow, the X-Men find themselves stranded on the space station now that Lang's minions have escaped in all of the escape pods. Going back to their ship, they find that the autopilot has been damaged, making it impossible to fly the ship through the solar flare passing through Earth's atmosphere without someone to pilot the ship. Corbeau points out that whoever pilots the ship would be flash fried by the radiation.

However, Jean steps up and offers to fly the ship -- pulling Corbeau's flying skills from his mind and believing that her telekinetic shield could protect her from the radiation. When Scott tries to protest, she uses her powers to knock him out and orders the other X-Men and Corbeau into the radiation shielded room. Even Wolverine and Storm fail to talk Jean out of sacrificing herself for them, but to no avail.

Sealing the hole in the ship with a telekinetic shield, Jean begins to pilot the ship back through Earth. In the shielded room, Cyclops revives and tries to break free, forcing the other X-Men to restrain him, telling him that it's too late to save her. As Jean flies through the solar storm, her powers are pushed to the limits and the radiation penetrates through-causing her extreme pain. As she is overcome, she screams out Scott's name.

This story is continued next issue.... 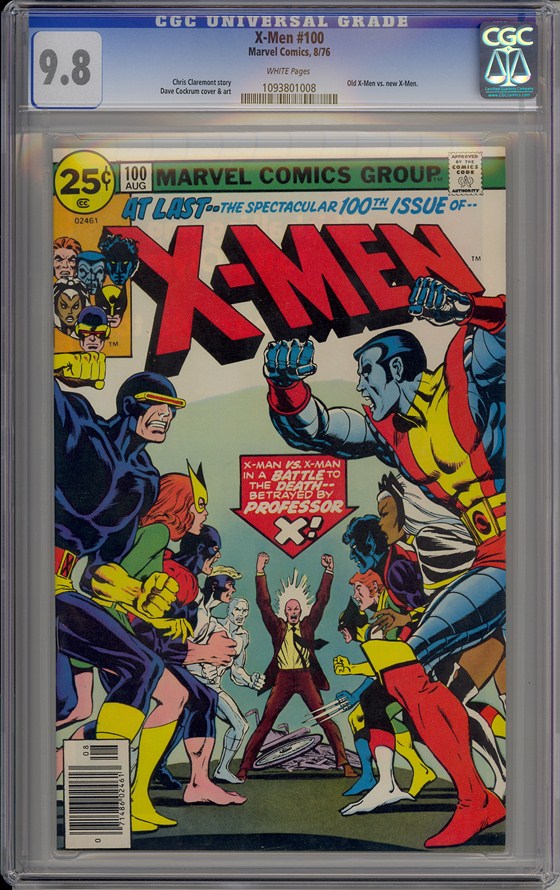