After investing countless hours, finances and quality time buying and selling CGC comics to build a World Class CGC Collection...how difficult would it be for you to just let go of your entire collection?

This is the question I have been wrestling with for the past 3 months...

However, after tossing back and forth many nights (due to increased anxiety) while trying to get some rest, and after reevaluating what is most important in my life, I made the extremely difficult decision to auction off my entire collection in order to repair my relationship with my wife and to begin digging myself out of credit card debt!

I have been intentionally avoiding having to write this journal, as it is still quite difficult to witness my prized books being auctioned off, knowing how hard I worked to assemble my present day collection. However, at the end of the day, I do feel at peace with my decision because I know I did what was right for my family and I. So here is "my" personal story of my CGC Collecting Career...

As I reflect back on how I began collecting CGC Graded Comics, I realized that I ventured into the hobby with the wrong mindset.

It was in late November of 2011, when I moved to Highlands Ranch, Colorado; a suburb outlining the city of Denver. This was a MAJOR transition for me, as I previously lived in the Bronx, NY for 7 years and primarily lived the majority of my life in other North East boroughs and cities such as Manhattan, Northern New Jersey and Rochester, NY. I was there because my wife's company offered her a temporary leadership position that would significantly boost both her pay and her resume credentials.

Prior to relocating to Highlands Ranch, I never thought that I would experience "culture shock," let alone the effects it would later have on me. Unfortunately, this is exactly what happened...although I didn't realize it during the time.

I was fortunate to have funds in my bank account due to receiving my summer pay checks, as many of you know that I am a real-life teacher/professor. Therefore, I didn't feel pressed to immediately search for a position in higher education or within one of the local school districts. As long as I was able to pay all of my bills without placing that burden onto my wife, I felt like I was okay.

So I waited...and took my time...all the while looking around my environment and feeling totally out-of-place-like a misfit! As I drove through my neighborhood, I witnessed the cookie cutter constructed houses and the "Edward Scissorhand" perfectly manicured lawns...this was getting really weird for me! Then, no diversity...and just surrounded by a horde of suburban Caucasian folk in which I felt I could not relate to, especially the ones who were trying to emulate people living in city environments and fabricating a fake "hard-core" lifestyle!

After all, I was born and raised in the inner city of Rochester, NY and went to an all-black middle school, and actually lived through major opposition and trials in which I could have died on several occasions. Further, I later experienced a ton of diversity after moving to NYC back in 2001. Therefore, I was now used to street lights, subway trains and people walking around and talking at all hours of the night...this was "my" norm. I was also used to simply walking outside of my building to eat at various restaurants from all types of cultures, and could pretty much buy groceries and get anything I needed within a ten block radius!

"Who is that...? Is that a...black woman...?" This was the look and strange facial impressions that one of our neighbors had on her face when she saw my wife pull up in our driveway in her shiny Jaguar! She actually walked out of her house and into the middle of the street in order to peer over into our driveway to get a better look at my wife, as if this was the first time seeing a black woman in the neighborhood-let alone driving a Jag! Now this was getting really uncomfortable! We were now surrounded by a bunch of nosy neighbors and felt like we had little privacy, which also includes having really needy and annoying landlords who would always call and stop by the house we were renting! Not good!

As time passed by, I slipped into a depression without realizing it. After visiting my brother for Thanksgiving in Rochester, NY in November of 2011 and pulling out all of my old Wolverine, X-Men and Amazing Spider-Man comics from the attic, I fell in love with my books like when I was 12 years old and felt an instant desire to collect again, after not purchasing a single comic since the age of sixteen (1994 to be exact)!

When I arrived back to Highlands Ranch, CO, I looked up Mile High Comics online, and literally purchased an entire run of Wolverine (1988)! Then, I researched the CGC, and sent about 30 books to be graded in December of 2011, without having any knowledge of grading criteria and standards. I received my first batch of graded comics in March of 2012; the grades weren't so hot, but I did land 9.8 copies of Wolverine #41 Second Printing and Wolverine #155 (Deadpool Cover).

Anyhow, in the interim while waiting for that initial submission to arrive, I kept myself glued to the computer screen and learned all about CGC grading criteria, the CGC census, and took note of all the major KEY Silver, Bronze and Copper Age books. I researched pricing trends and compared past sales with the current market value, and began winning books off of eBay. As a direct result, I became a CGC Registry member in January of 2012 and began assembling a Wolverine (1988) Set, "Against All Odds," which would eventually become the #5 CGC Ranked Set in the world, the first to showcase 15+ consecutive issues in CGC SS 9.8 or higher, and the first to receive the Best Presented Set (2012) for that Set Type!

It was on now! I studied the CGC comic book market like the stock exchange and began flipping books on eBay and using the profits to reinvest into more books to complete my sets! Unfortunately, I started to view my CGC Collecting "hobby" as a full-time "job!" I was so into my collecting, that I started to loose my connection with my wife, as she worked all-day while I was networking with CGC dealers all across the country and building up my sets. Our communication gradually became impersonal and limited, as all I had on my mind was my next deal and acquisition, which of course I couldn't share with her because it was selfish, and I didn't want to hear "the truth" from her that I needed to spend my energy in finding a real job!

What was really messed up, is that I became so intent in wanting to take over a #1 spot in a set type, that I literally spent thousands of more dollars on my credit cards, while still unemployed and already in credit card debt, without telling my wife a thing! It was my little secret, after all, it was my money...wasn't it?

So "The Inaugural Slashing" was birthed, and became the #1 CGC Ranked Wolverine Limited Series (1982) Set in the world for both 2012 and 2013! I was so ecstatic to have taken out World's Best Comics, who previously held that title for "5" consecutive years! I now had "2" world class Wolverine sets and continuing to acquire more precious gems, like my Incredible Hulk #182 CGC 9.8 WP, that I only paid $100 in exchange for two copies of ASM #129; one in CGC 6.0 and the other in CGC 8.5-a very nice flip! I was getting really good at this!

I began moving from collecting primari 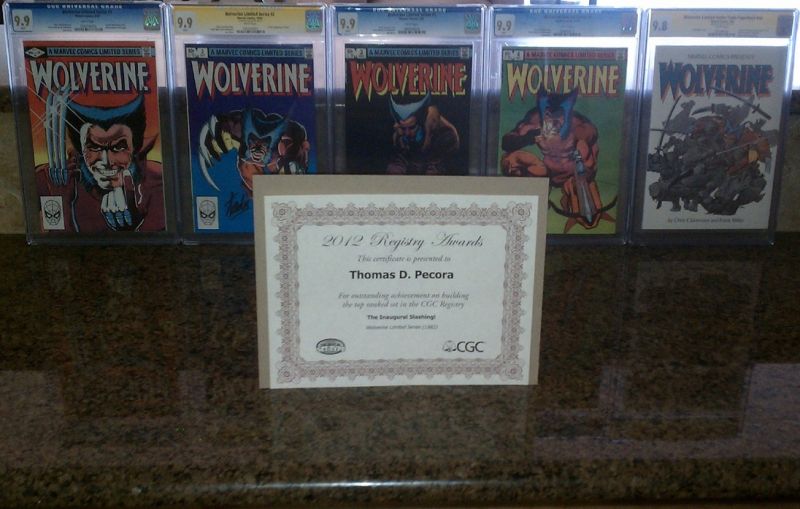