After a successful four part miniseries published from September-December of 1982, it took a little over 6 years before Wolverine was honored with his ongoing solo title apart from the X-Men!

Published in November of 1988, right around the time of Halloween, not only does the dark imagery perfectly display the raw savagery of Wolverine, but it was very fitting that the Wolverine logo was inked in orange for superior marketing.

The cover art drawn by the late John Buscema is a certified classic! A victorious Wolverine is featured standing on a pile of dead bodies with his shirt torn off his muscular physique and his pants slashed open, while his razor sharp claws are being ejected from his forearms with a full moon lighting up the midnight sky! In addition, the full-length Wolverine back cover pin-up drawn by John Byrne is awesome!

After selling my former Wolverine #1 CGC SS 9.9 (Stan Lee) in which fellow CGC Registry member frostking70 now owns, I never thought I would ever own another CGC 9.9 example. The reasons for thinking this were simple; I have not seen a copy show up at auction in about 4 years and the known 12 Universal CGC 9.9 copies were all locked up in private collections. However, fate would have it otherwise!

This particular copy was a personal submission and makes history as the 1st book I submitted to the CGC that was graded as a MINT 9.9! Officially graded in June of 2016, my copy became the "13th" Universal 9.9 in existence!

This is a MAJOR accomplishment; as I can recall back in early 2012 the total number of Wolverine #1 Universal CGC 9.9 copies totaling to a mere 11 or 12! That means that in four consecutive years of submissions, only 1 copy (possibly 2) was graded as a CGC 9.9 due to the unforgiving dark cover!

The next question one might ask is..."how much is it worth?" To put this in perspective, on June 10, 2016, the single highest graded Wolverine #1 CGC Gem Mint 10.0 sold for an astonishing $17,644 on Comic Connect! With nearly 7,000 copies already professionally graded and being a dark cover in which the smallest of defects are detectable, it's highly unlikely that another 10.0 copy will emerge, let alone another 9.9 anytime soon! Therefore, this book will definitely command a pretty penny if it were ever to be sold!

As a matter of fact, this CGC 9.9 white paged specimen may very well be the finest known 9.9 copy in existence! It is PERFECTLY wrapped, cut and centered with perfectly inserted staples and a drum tight spine! The color saturation is deep and vivid and looks like it was printed yesterday! Not even the single 10.0 copy is perfectly cut and wrapped like this pristine beauty! Furthermore, if you compare this copy to other CGC 9.9 examples, you will see that it is more perfectly wrapped and centered and displays superior aesthetic qualities!

In closing, I want to give a special shout-out to Matt Nelson of CCS for prescreening and lightly pressing my book prior to submitting to the CGC for grading! I am truly grateful for your services! Last but not least, I want to thank God for blessing me with this awesome acquisition and for resurrecting and breathing new life into my Against All Odds Wolverine (1988) Set!

The odds were truly against me...but then came number thirteen (13)! 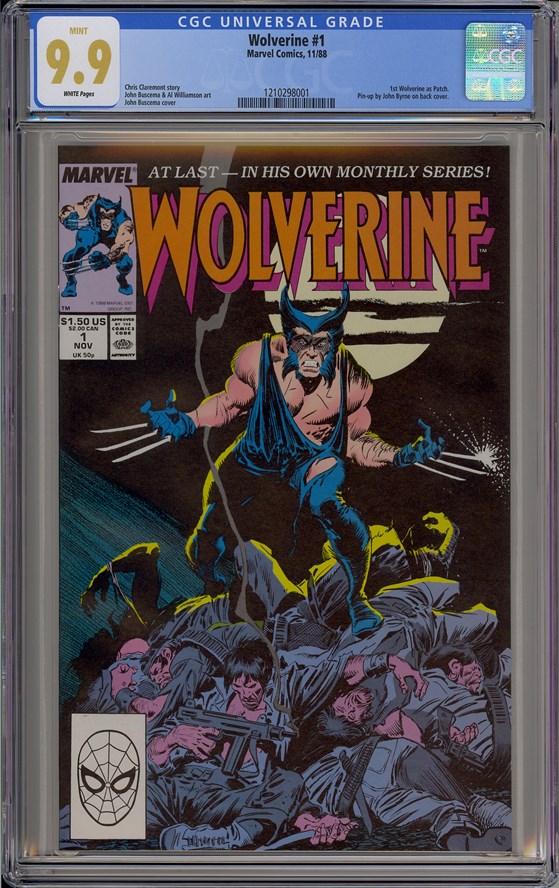