In terms of collecting focuses, I guess mine are probably fairly common.

1. I'm just setting off on the journey to build a high-grade competitive registry set for The Joker (1975), called "Eat Your Hearts Out!". Even though this run has only a fist-full of books in it, I expect that it will take some time and even more luck to complete in high grade. The census numbers for 9.8's across the set are both dauntingly, and excitingly, low.

2. For fun, I also like collecting Joker covers, classic Batman covers, Batman-related homage / cover swipes and whenever I see those hounds (Batman #395, Dynamic Classics #, Batman #227 (and most Tec 31 swipes), I have to have them! I mostly pick these books up raw.. but when there is a deadset classic in the mix, like Batman #227 or Batman #251 - then I have to go graded!

Which leads me to...

3. My primary focus - 1st appearances of Batman villains. But, given I am average Joe, this will usually mean I'm looking for things like 1st Silver Age or 1st Modern appearances over the Golden Age. Honestly, I'll probably make my own rules a little here and there and bend some others... for example, the likelihood of me owning Batman #1 for the 1st app of the Joker is somewhere in the vicinity of zero. But, maybe I'll be able to pick up a (very low grade) Detective Comics #168 and fill that slot with his origin and I might keep that seat warm with a Joker #1 in the meantime... etc etc... 😬

To be frank, it's taken me a really long time to really settle in on this theme as a primary focus. I got lost in the weeds chasing any Bronze Age 1st app for awhile and, while this was fun and also allowed me to flip some great books to help my family when I needed to, it feels good to hone in on a primary focus and make sure I spend my meagre comics budget in the right way.

Growing up I loved lots of books but my top three were Batman, The Phantom and Wolverine. Obviously Wolvie is a deadset weapon, but the thing I loved about The Phantom and Batman was that they were just men. Men who had motive, means, morals and a vigilante streak. I could relate more to a normal man than I could a mutant or an alien... even if I didn't have the "means" part of the equation. Over time I was more attracted to Batman's tech and the awesome villains he had to face down and the Phantom fell by the wayside to become a fond memory, while I just followed Batman. So, while I've read a bunch of Marvel, Image, Dark Horse, Golden Key etc.. I feel like I've always been a DC guy at heart.

I was a little surprised that I couldn't find a competitive set for a Batman villains theme (although that could just be PEBKAC) so I created a custom set, called "The Rogues Gallery". It needs a LOT of work/love/sweat/tears/dollars to make it what I envision it to be... both in terms of the hunt but also in how it will eventually be presented. But, I'm excited about it and this journal is a way to capture some of my thoughts and experiences as I go.

Which leads me to yesterday's "mail call"... Teen Titans (vol 6) #12 - the first full appearance of the Batman Who Laughs. While this is not even close to being the first Bat villain book in my collection (like I said, that set needs a lot of love), it's the first one that I've purchased since really embracing my primary focus. 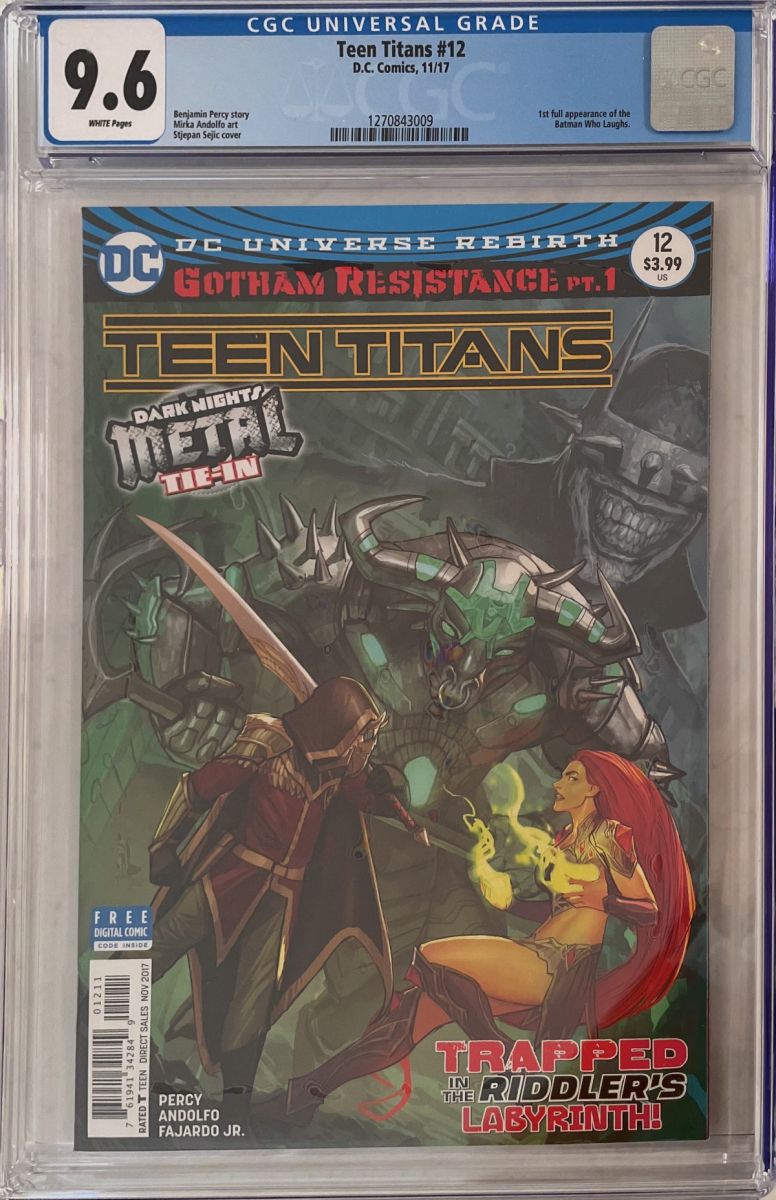 The market pricing for this book puzzles me... unless there is some DC cinematic universe rumour that I don't know about... but, at the time of writing, a 9.6 is selling around $190 and a 9.8 is selling around $780. I can literally buy a mid-grade, nicely presenting, Batman #189 for that price gap... so I couldn't justify outlaying for the 9.8 when there are beautiful 9.6's available! (Big thanks to @Wall-Crawler for providing awesome advice and being a sounding board through that decision!)
Don't get me wrong, I freaking love this character concept. While it's not my favourite arc from that creative team, I love the idea of a villain who embodies a merge of my favourite good guy and my favourite baddie and I am stoked to be able to add this first full appearance to my collection. (I'll look to pick up the Metal #2 cameo later as a lower priority, as I already have a raw copy of Dark Days: The Casting)

I kind of gave it away above, but my next target is Batman #189. I'll write more about what I love about the Scarecrow when I have that book in my grubby paws.