Here's my newest acquisition, straight from the wilds of eBay. 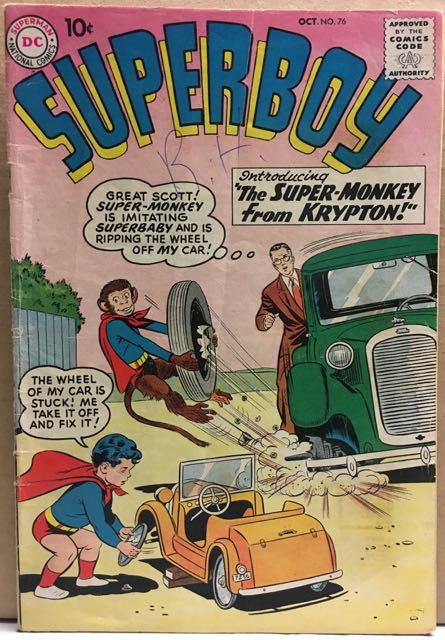 When I first discovered the eBay alerts were a thing, this was one of the first that I set up.  I have no idea why it took such precedence, as it's just the first appearance of a very minor character, that being Beppo, the Super-Monkey!  In all reality, who wouldn't want this book, am I right?

Over the intervening years, I have found it near impossible to find a nice looking copy at a fair price.  There is something about DC silver age books with monkeys and apes that bring out the big bucks.  With that in mind, I just decided to pick up a VG copy so that I can finally cross this one off of my list.

Anyways, this listing came across my radar so I put in an opening bid of ten bucks, and won it.  I'm sure the "R.H." initials put some bidders off, but personalizations like this don't really bug me.  In some cases, like with date stamps, they add to the charm of a book.  Knowing that little Robby Harrison (or maybe Ronnie Hargrove, or Richie Holt, or Robin Hunter, or Reginald Hawksmoor III) took the time to initial his/her book shows that it was well loved back in 1959.  Now if it was initialed with a big black permanent marker, that would be a different story.

Even though I initially won this auction for $9.99 (plus free shipping!), I actually ended up getting it for free.  When it arrived at my house, I opened up the box and Superboy #44 was inside instead.  Uh oh...I contacted the seller and he was really apologetic about it, and had a bunch of different orders shipping, and it's obvious he got a couple of labels confused.  I offered to send the Superboy 44 on to it's correct owner and waited for my issue to work its way to me.  The seller ended up crediting my purchase, as the other buyer never responded to his emails.  Fast forward a week, and the seller emails me to let me know that he found my book misplaced in a stack of other books and would send it out to me at no cost.

So I ended up getting this book for free, losing only a little bit of my time in the process.  I call that a win!  The seller also got a future customer in me, as I appreciated the above and beyond customer service that he provided.