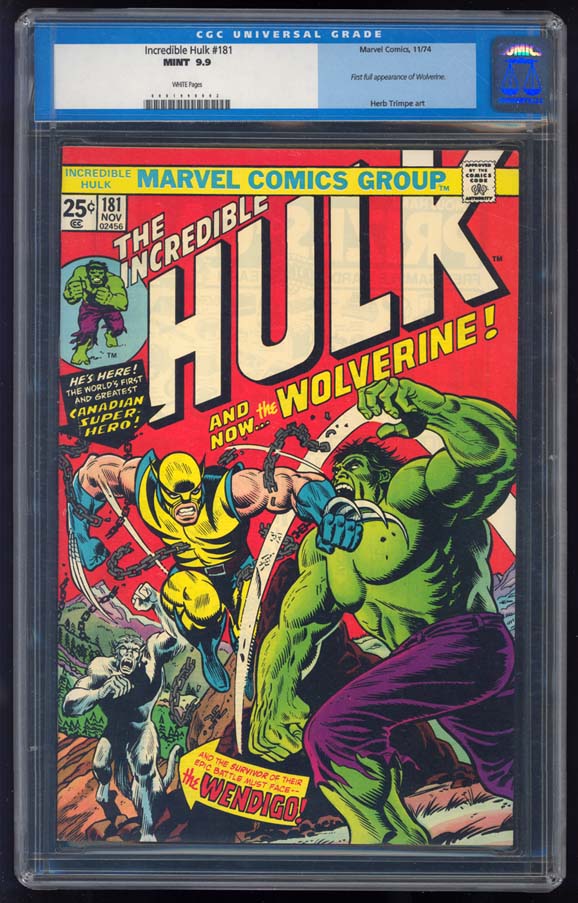 A Bronze Age comic has broken the six-figure ceiling with the single highest CGC graded example of Incredible Hulk #181, Wolverine’s first full appearance, changing hands on ComicLink for $150,000. This lone 9.9 has long been estimated to be the single most valuable comic book of the 1970s, but it had never changed hands publicly until this sale a few weeks ago. This number sets a new standard for high grade comics from the Bronze Age and clearly demonstrates the popularity of Wolverine amongst collectors.

Next to Spider-Man, Wolverine has emerged as the most popular superhero in the Marvel Universe. Shortly after Incredible Hulk #181, Wolverine appeared in Giant-Size X-men #1 and X-Men #94, becoming a permanent part of the most exciting superhero team of the last four decades. X-Men is not only one of the most significant Marvel titles of all-time, but it is one of the most successful entertainment franchises to ever emerge from the comic book industry. Wolverine has long lead the way as the most popular of the Marvel mutants, not only featured in his own long-running title, but also being the first to get his very own blockbuster feature film, X-Men Origins: Wolverine.