The 1938 comic book that introduced Superman to the world is considered the "holy grail" of comics. 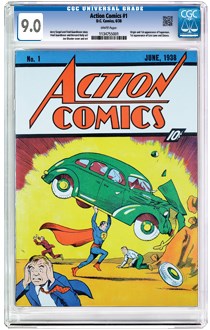 Certified Guaranty Company (CGC) has announced that it has certified the finest known specimen of Action Comics #1, the 1938 comic book that introduced Superman to the world. The book, which received a CGC grade of 9.0, will be sold unreserved on eBay, August 14–24, by prominent collectibles dealer Darren Adams.

Widely regarded as the “holy grail” of comic books, there are believed to be as few as 40 to 50 unrestored original copies of Action Comics #1 still in existence. Published in 1938 by DC Comics, the book’s first issue had a print run of 200,000 copies and a cover price of just 10 cents.

“This is an extraordinary opportunity to acquire the most valuable comic book in existence and we look forward to sharing a piece of pop culture history with the global eBay community,” said Gene Cook, general manager of emerging verticals for eBay Marketplaces.

The Adams book’s CGC 9.0 equals the highest grade ever assigned to an Action Comics #1 by the leading third-party grading service. Among the copies that have been graded by CGC is only one other 9.0, which had cream to off-white pages. That Action Comics #1 was sold for a record $2,161,000 in 2011 by ComicConnect.com.

"The quality and preservation of the Adams Action #1 is astounding,” said Paul Litch, CGC primary grader. “The book looks and feels like it just came off the newsstand. It is supple, the colors are deep and rich, and the quality of the white pages is amazing for a comic that is 76 years old.”

A portion of the proceeds will benefit the Christopher & Dana Reeve Foundation. For more information about the comic and auction, please visit cc.eBay.com/action-comics. A free digital viewer of the comic book’s inside pages is also available on the CGC website at CGCcomics.com/1134755001.