CGC Video Games Announces Consoles That Will Be Graded at Launch

Video games from the most popular systems will be graded by CGC Video Games when the division launches later in 2022.

With the launch of CGC Video Games™ later in 2022, Certified Guaranty Company® (CGC®) is excited to level up by adding some of the most popular video games to its growing list of collectibles certified. Since 2000, CGC has certified more the 10 million pop culture collectibles, including comic books, trading cards, magazines, concert posters and more. 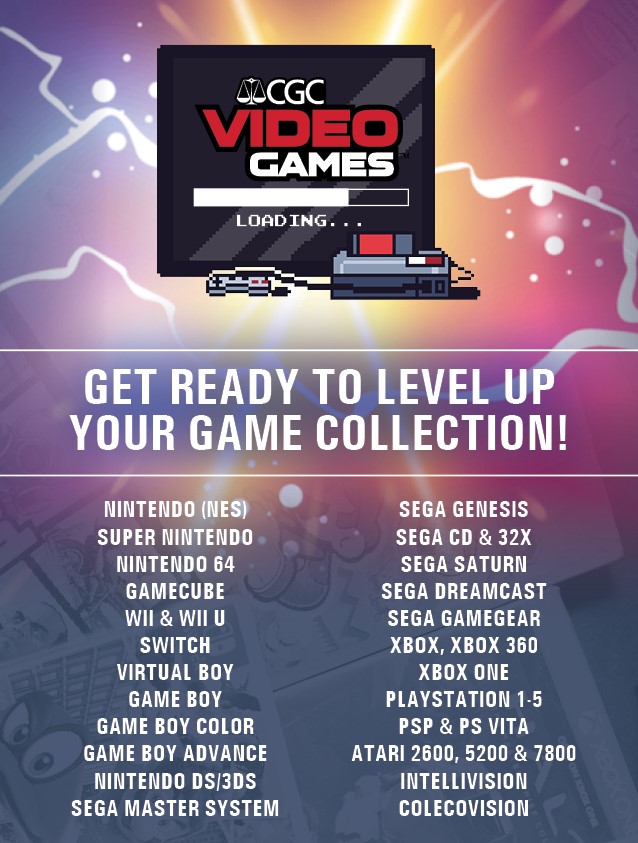 From Frogger to Fortnite and Mario to Master Chief — no matter what games or console(s) you collect, CGC Video Games can help give your collection an extra life with our superior video game grading service.

CGC Video Games is thrilled that Matt McClellan, one of the country’s top video game experts, is leading the CGC Video Games grading team as Senior Video Game Grading Finalizer. Prior to joining CGC Video Games, McClellan operated an independent video game store for nearly a decade, becoming an authority on video game authenticity, condition and rarity. His video game knowledge is broad and encompasses a vast range of video game consoles, but McClellan is particularly well-regarded for his expertise in authenticating sealed original Xbox games and modern systems in general, as well as all Nintendo games.

The CGC Video Games team is developing a superior video game holder that is super-sleek, crystal clear and more protective than any other option on the market. So far, the prototypes are looking awesome. For the latest updates, follow us on Facebook, Instagram and Twitter.